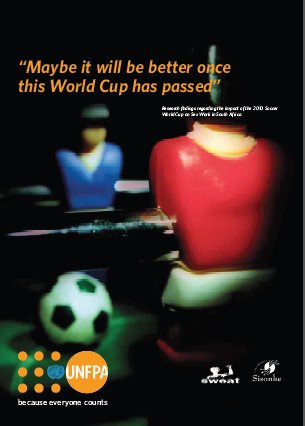 In the months leading up to the 2010 FIFA World Cup in South Africa, international media postulated that at least 40,000 foreign sex workers would enter South Africa, and that an increased HIV incidence would follow. To strengthen the evidence base of future HIV prevention and sexual health programmes during international sporting events, the Sex Worker Education and Advocacy Taskforce (SWEAT) and Sisonke – the national movement of sex workers in South Africa – embarked on a research study to monitor the supply and demand of female sex work in the weeks before, during and after the 2010 FIFA World Cup.

"Many sex workers expected an increase in clients and foreign currency but three-quarters of them said there was no change in working conditions and about 16 per cent said that they got fewer clients," said Marlise Richter, of the Forced Migration Studies Department at (University of the Witwatersrand, South Africa).

Four research sites were selected in three cities where World Cup matches were played in 2010 – Cape Town, Rustenburg, Hillbrow and Sandton. The research period was divided into three sections: i.) pre-World Cup, ii.) during the World Cup, and iii.) post-World Cup. The research involved sex workers who were interviewed by their fellow mates who also doubled up as peer educators.

“The World Cup must just leave” – The impact of the 2010 Soccer World Cup on sex work and migration in South Africa - a qualitative study:
http://www.hivaids-uwc.org.za/docs/posters2013/Sex_work_and_migration_in_four_sites_in_South_Africa-MarliseRitcher.pdf (infographic)