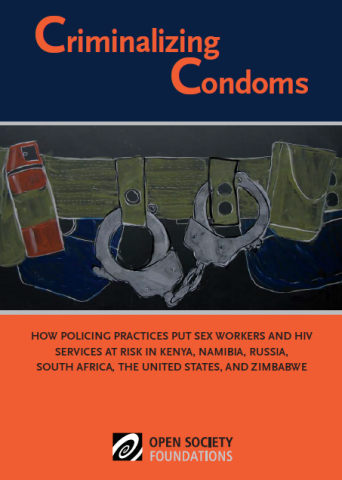 Image: Cover of the Criminalizing Condoms report released by the Open Society Foundation in July 2012.

The study observed the practice of police actively stopping and searching sex workers for condoms, either to destroy, confiscate or to use them as evidence to arrest sex workers.

Treating condoms as contraband has forced many sex workers to choose between unprotected sex or being arrested by police. The report also notes the consequences of this practice on sex workers' lives, including their vulnerability to STIs, such as HIV.

The report’s key findings are:

This report also revealed that in most cases police went onto harass, physically assault and sexually abuse sex workers who carried condoms on them. Many used the threat of arrest on the grounds of condom possession to extort and exploit sex workers.

The report concludes that criminalising sex work and the use of condoms as evidence leaves sex workers particularly vulnerable to sexual infections and police abuse. The Criminalising Condoms report goes onto to offer several recommendations for national and local government agencies, as well as public health and HIV/AIDS researchers and agencies.