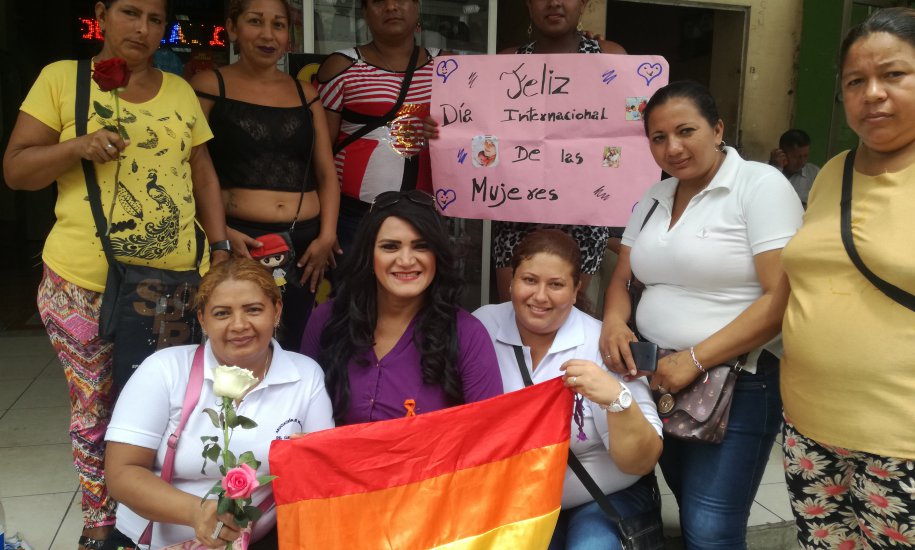 Ecuador is located in Northwestern South America, bordered by Colombia to the north, Peru to the east and south, and the Pacific Ocean to the west. Ecuador also includes the Galápagos Islands in the Pacific, about 1,000 kilometres (620 miles) west of the mainland. San Francisco de Milagro is a city located in a coastal province named Guayas.

Asociacion Diversidad Sexual Milagro is a sex worker-led organisation in Milagro, whose work focused on speaking out against violence, advocating for health services for their community, and empowering women and trans sex workers to realise their rights.

Which countries and/or regions is the organisation focused on?

The city of Milagro, Ecuador.

The organisation was founded by our president, Katerin Mejía, using her own perspective.

The marginalisation, violence and discrimination she lived for being a trans woman and sex worker, gave her courage to speak out, and in 2012 she held the first meeting with LGBTI population and sex workers, and she was elected as the president of DISEMI. By that point, she had already been empowering herself and learning about human rights activism.

The board was formed with liable people elected from among the attendees of the meeting. The goal of the meeting was to choose spokespeople who will fight for our human rights. Ten people applied for the call, and after the vote, there were 5 elected members for the board.

In the city of Milagro there is a high rate of discrimination when you are not part of the mainstream way of life, and you are not playing the role that the patriarchy needs you to play.

Since the day the organisation was founded the first goal was to be formed as a legal entity, and it took 5 years to finally get it. It took us all that time because before this process we had no knowledge of how to conduct ourselves in those areas. They also put some obstacles in the offices of the ministries; but we got advice, we adhered to the laws, and finally we reached our desired goal. Today we are legally constituted and we can get support from different partners and participate in more spaces to achieve more in our work for the benefit of our community.

During those 5 years we worked as volunteers in several projects and with self-financing. Now we have the legal name of “Asociación Diversidad Sexual Milagro DISEMI” (Association Sexual Diversity Milagro DISEMI) since 17th August 17th 2017. This is the first organisation dedicated to the protection of human rights of vulnerable groups directed by an LGBTI board in the city of Milagro.

What are the priority areas that the organisation works in?

We advocate for universal access to health services, including primary health care, HIV and sexual and reproductive health services. We speak out about violence against sex workers, including violence from police, institutions, clients, and intimate partners, while challenging the myth that sex work is inherently gender-based violence. We oppose human rights abuses, including coercive programming, mandatory testing, raids and forced rehabilitation.

We advocate for the economic empowerment and social inclusion of sex workers as sex workers, and work to improve awareness and eradicate discrimination on the basis of sexual orientation.

We facilitate training and workshops, for example on empowerment and leadership. With self-financing we conduct workshops to empower and give capacities to new leaders. With this we make sure to constantly train more brave and courageous people to act as spokespeople so that eventually can have influence to stop the violation of our rights. These spokespeople help us to be more visible and at the same time communicate accurate evidence that decreases the stigma and informs wider society. We also run workshops on HIV/AIDS dialogues, in order to promote safer sex and knowledge on HIV. We also conduct human rights workshops with emphasis on the trans population who are sex workers.

With all these activities we prioritise specific topics and actions around:

• Legal accompaniment to comrades who have suffered or suffer some kind of discrimination or violence.

• Protests in favour of human rights

If the organisation provides services to sex workers, what kind of services?

• Delivery of condoms and lubricants

If the organisation does political work, what kind?

We do not do political work but we work in the construction of public policy standing for the human rights of the LGBTI people.

Our board is made up mostly by trans women who do sex work inside and outside the city and even the country, because the organisation was created to ensure our rights. We also include the LGBTI population as they are among the most vulnerable in our country.

Some members of our organisation work in Europe, but there they do not face as much discrimination as we do in our country.

We are 5 members of the board and 25 who are associated with our group.

What were the biggest events or challenges this organisation has worked on in the past? E.g. opposing or campaigning for a law; organising an event …?

The legal accompaniment has definitely been one of the greatest challenges in our city. We are still the only organisation that publicly denounces specific cases of discrimination. During 2017 there were 5 legal complaints for violation of rights, 2 of them culminated in mutual agreement, and for the rest there has not been any pronouncement of sanction on behalf of the authorities. Nevertheless we continue working in those cases.

To live here being a trans, young, sex worker, and slum woman definitely makes people classify you as if you were a lower class person; as if we were not deserving of rights. These violations of our rights push us to continue working every day in order to achieve the “good living” which is a concept that the Ecuadorian Constitution speaks so much about. To raise our voices in a society that marginalises us, excludes us and discriminates against us for being sex workers and for having a different gender identity or sexual orientation.

In the city of Milagro we have a lot of challenges, especially after a group of trans women decided to do sex work on the streets. Since then we have fought against harassment, persecution and being mocked by the authorities, which instead of protecting us, they discriminate against us and let others do it too.

To make our work known, we have a great opening with the press; but the biggest barrier we have is local government. They constantly try to make us invisible and are not open to give us facilities to continue working. The patriarchy that survives in Milagro makes every day a struggle to give the importance that equality and equity we deserve in our city. This in itself is difficult, but it is even more so in our case, since we do not have financing and all our activities are self-managed. Every day we fight with this monopoly that allows our rights to be violated.

The situation of sex work is hard and complicated in Ecuador, both legally and socially.

We are attacked daily, the law almost does not protect us, socialisation or awareness campaigns are not carried out, our work is criminalised and we often face violence.

We must continue working in a hostile environment, specifically now after the campaign “Con mis hijos no te metas”. (“Don't mess with my children”). This ultraconservative movement was born in Peru in 2016 and replicated in many Latin American countries as a reaction to public policies which introduced a gender perspective in education and other areas of the State apparatus. The campaign created the concept of “gender ideology” and say it is part of a conspiracy to “homosexualise” the countries and cause instability in the family nucleus. This has had a knock-on effect on sex workers in the region.

Today we are focused on working and entering the first municipal ordinance in favor of diversity and sex work. This is a great challenge that we are facing as an organisation.

Our message for the sex worker rights movement is that together we are stronger. Let’s boost our work to make it visible and show that sex work is work.  And if someone tries to violate our rights, let’s be prepared with necessary tools and knowledge to enforce the laws of our countries. If the local laws do not favour us, let’s embrace international human rights and work to promote new local laws.

Being empowered and finding strength our leadership is the only way to be free in our own work. Let's protect our work, let's eradicate all kinds of violence and discrimination using our learning and the strength of our union.

The more we support each other, the more we will achieve a good living. Let's move forward with love and respect for a world with equality and equity.

The message for people who do not know the sex work movement and for society in general is that sex work is work, like other forms of labour. To do it requires effort and capacity. Discrimination and violence does not mean that sex work is going to be eliminated, but that it is going to be violated, which means that we sex workers will continue being violated, and that our lives will be at risk, when all we are doing is working.
Society has to respect the decisions of people. A fundamental part of good living is love and what you can offer people, without judging them or pointing them out for judgement for the work they do.