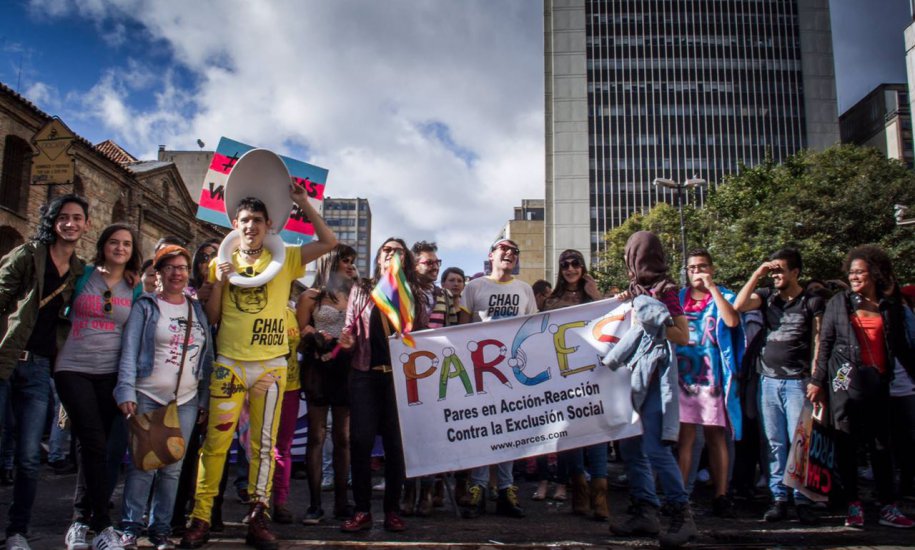 PARCES NGO is a sex worker-led organisation in Bogotá, Colombia. “The main purpose of the organisation is to identify the different forms of discrimination experienced by sex workers and fight oppression and violence against sex workers, LGBT people, trans women, drug users and panhandlers,” said Sebastian Laz Sanchez from PARCES.

They oppose the criminalisation and legal oppression of sex work and support the recognition of sex work as work. They criticize the paradigm shift that conflates sex work, human trafficking, migration, and mobility.

They oppose human rights abuses, including repressive programming, mandatory testing, raids, and forced rehabilitation. They fight stigma and discrimination against sex workers, families, partners and others involved in sex work.

"Each word in the acronym PARCES has an important meaning. P(eers) because they are all equals; A(ction) because they work at a grass-roots  levels and not from an academic standpoint; R(eaction) because they are unable to sit still in the face of the violation of human rights. All of these actions are aimed at the pursuit of social justice and to end social exclusion," said Sebastian.

What is the legal context of sex work in Colombia?

Sex work is legal and recognized by the Constitutional Court as decent work in Colombia. However, there is constant discrimination, violence and denial of rights for sex workers in the country. The stigma associated with sex work denies dignity to sex workers.

Law enforcement and criminalisation of non-traditional identities in Colombia is governed by a Code that was developed in 1971, even before the Constitution of 1991. This Code does not standardize police behaviour, which permits police officers to act on their prejudices, discriminate against vulnerable people, punish and criminalise drugs users, sex workers, trans people, LGBTI people, homeless people and panhandlers. Within this framework, the police have the power to detain people in a Permanent Justice Unit based on prejudices about gender identity, job dedication, dress, or appearance.

What services does PARCES provide to sex worker?

What are some of the successes of the organisation? The opening of the exhibition was held at Valenzuela Klenner Gallery on the 6 of August, 2015. Subsequently the exhibition rotated through different locations of Bogotá, including community centers, educational facilities, government institutions, places of memory of the armed conflict, art festivals, among others.

Apart from the photo project, PARCES also uses public spaces to resist the exclusion of sex workers. The current administration in Bogotá have tried to exclude sex workers from accessing public spaces, so they often have events and protests in public. Sex workers are not welcome in public spaces in Bogotá, and PARCES resists this.

What are some of the challenges faced by the organisation?

Based on the work that has been done by PARCES and consultations with several NGO leaders, PARCES shows that the stigma that workers live daily limits their rights in several ways: they are denied health services for themselves and for their families, they feel isolated in public places of the city, they have no access to education, alternative employment, or job opportunities, and much more. They are also targeted by several social cleaning groups operating in the city, so even if there are places where society tolerates them, they live in constant danger. "This is one of our biggest challenges," said Sebastian.

"This situation is not treated as seriously as it should in the country, because many think sex workers are deserving of ill-treatment. Sex workers experience stigma, not only because of their work, but because of their race, social status, gender, and sexual orientation. PARCES aims to fight stigma, by showing the general public images of sex workers and their workplaces," continued Sebastian. How is the organisation structured?

PARCES NGO works through Participatory Action Research (PAR), which seeks to empower the community and generate knowledge that will have an impact on sex workers.  PARCES uses PAR for their advocacy work and to end violence and oppression against sex workers.

What are some of the challenges PARCES may experience in the future?

Colombia is in a historical moment of transition to peace and all institutions are preparing for post-conflict to enforce agreements made in Havana. PARCES is preparing and positioning itself to be one of the organisations that manages and opens spaces for the participation of marginalised people in the process of building peace in Bogotá.

What message would you like to share with people inside the sex workers’ rights movements? What about with those outside the movement?

“Do not intervene in our communities with the desire to alter them. Raise political awareness and build lasting and close relationships with people who work in the sex industry. Build bonds of friendship and confidence that could mobilize the struggle for social change,” said Sebastian.