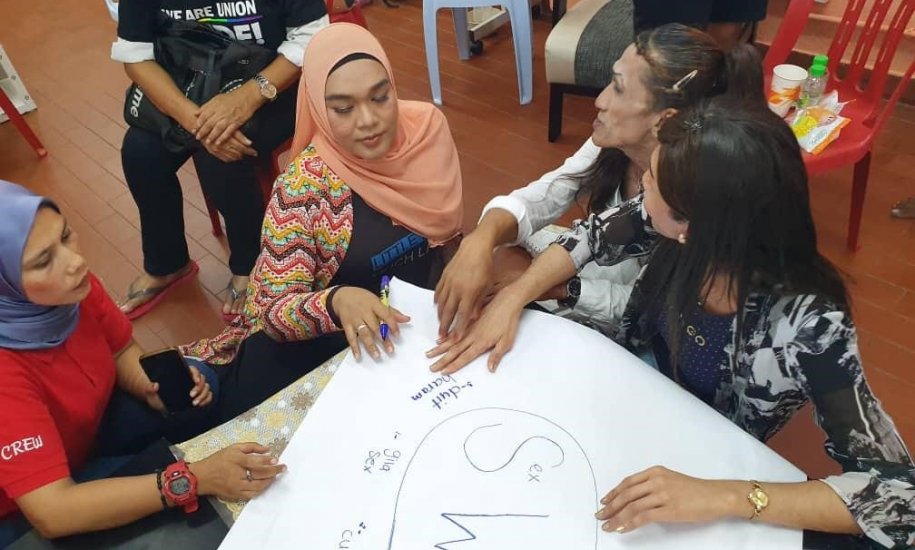 Introductory sentence on your organisation:

Pertubuhan Kesihatan dan Kebajikan Umum Malaysia is an umbrella network for the community of sex workers. PKKUM’s goal is to respond to challenges faced by sex workers through:

PKKUM’s mission is to empower and advocate for their health, social and human rights including those living with HIV and those using drugs, through collaborations, networking and partnerships. PKKUM aim to uplift the wellbeing of female sex workers through raising awareness of their social, health, promoting healthy living, prevention of diseases through advocacy, education, and information.

Sex work is restricted in all states despite it being widespread in the country. Originally the sex workers were locals, but there has been an influx of foreign sex workers over the last 10 years. Sex workers from China, Myanmar, Vietnam, Thailand, Laos, and Cambodia now outnumber locals. Kuala Lumpur has a number of red-light districts where street prostitution, massage parlours and brothels can be found.

PKKUM believes the right to work and advocate for sex workers, and runs programs that empower sex workers to have a better living.

PKKUM focuses on the following areas:

There are no federal laws against sex workers but there are laws against related activities. Section 372 of the Penal Code criminalises soliciting in any place and living on the earnings of a sex worker. The latter is applied against those who run brothels.

The Prevention and Control of Infectious Diseases Act 1988 provides an offence for exposing another person to the risk of HIV infection and local health regulations prevent 'beauty and health establishments' from employing sex workers or allowing entry to, or employment of, persons with HIV.

Sex workers can be punished when caught negotiating sex ‘aggressively’ with a client. Sex workers are harassed and punished by law enforcement agencies that apply administrative offences.

Various other laws such as those against vagrancy are also used against sex-workers. For instance the Sharia Criminal Offences Act, which brings Sharia law into force, is in effect in Kelantan and is still previewing implementation throughout Malaysia that applies to Muslims. Sharia law allows fines and public whipping or caning for "any woman who offer sex service herself in public". Buying of sex is also forbidden according to Sharia Law.

Law enforcement focused on closing brothels has shifted the sex industry to entertainment venues and hotels and public soliciting is now gradually being replaced by internet and mobile phones. According to sex workers the law enforced by ill disciplined, underpaid civil police and overzealous religious police so that violence and abuse is common especially against drug users, migrants, transgender people and sex workers.

PKKUM oppose the criminalisation and other legal oppression of sex work, we also critique the trafficking paradigm that conflates representations of sex work, migration, and mobility of sex workers. We advocate for universal access to health services, including primary health care, HIV and sexual and reproductive health services. Our biggest challenge is the stigma and discrimination against sex workers, their families and partners, and others involved in sex work not only that we also advocate them in economic empowerment and social inclusion of sex workers as sex workers.

Religion is one of those institutions that frown against sex work and the community are judgmental and sometimes they even use religious texts to bash people who are in this industry, but if we were to look at it from another angle sex work is a very old industry and it has been around since the Japanese invaded us. It’s not new. It is important in our field of activism that we are opening doors and engagement towards sex workers’ wellbeing. Recently we are working hand in hand among the sex worker organisations and ally organisations to address the challenges and to reform national network in Malaysia. This initiative is a collaboration with Asia Pacific Network of Sex Workers (APNSW).

Globally it is recognised that prevention and treatment efforts among sex workers require not only a clinical approach, but interventions to address the vulnerabilities of sex workers on a structural level, including legal and physical.

In addition, alongside sex worker’s susceptibility to HIV and other sexually transmitted infections, sex workers face a number of barriers to good health. A major problem for sex workers is lack of access to quality health services, with barriers to utilisation including stigma, inconvenient hours of operation and contraception use is limited among sex workers, who frequently face rape and sexual harassment by clients. Because sex work is illegal in Malaysia, the sex industry has been driven underground, leaving sex workers legally vulnerable. Given the socially stigmatised nature of their work, sex workers are left without recourse to legal protection from threats to their safety, vulnerable to arrest and abuse and without access to health and social services.

PKKUM works on the area of condom distribution and lubricants and also support sex workers on the health issues of female sex workers through the initiative of Ministry of Health (MOH) which has provided grant on Prevention and Control of Infectious Diseases focusing on HIV. We look at this opportunity as the perfect one for us to get up close with the sex worker community.

Sex workers are involved in our organisation through our outreach on a grassroot level such as going to the "red area" whereby our outreach worker build the rapport. Community sex workers are also involved with Drop-In Centre In-House Session, serving them 3 decent meals 5 days per week, a place to rest and have a peaceful sleep. Our Shelter home provides accommodation specifically for sex workers who need a place to stay on a temporary basis.

To date PKKUM, through its outreach workers and case workers, has reached more than 500 sex workers as our clients to ensure that their health and wellbeing is taken care of physically and emotionally. We exist to serve the sex worker community with legal support systems and also we provide shelter for them when they are in need or taking a big leap in their life to move on from sex work.

As we are growing each day, there are a few things that may help us in overcoming our daily struggles. Financial support has been the main obstacle. Among the necessities that would help us are: