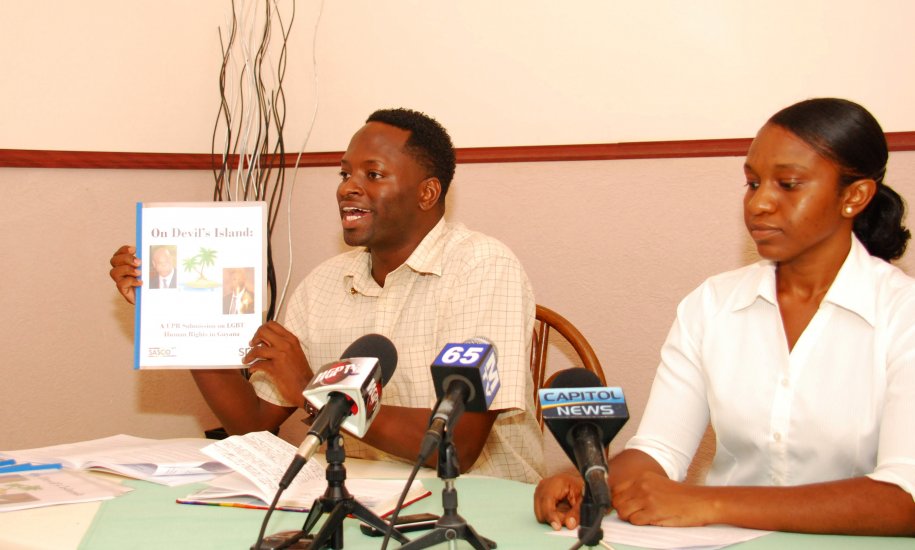 In 2001, the Guyanese National Assembly had unanimously passed a constitutional amendment bill with comprehensive reforms, including new expressly prohibited grounds of discrimination. “Three new grounds in particular raised the ire of sections of the religious community: marital status, religious vilification and sexual orientation.” Said founder Joel Simpson in a 2013 Huffington Post article. “Initially campaigning against all three, but eventually settling for the biggest perceived sin (sexual orientation), sections of the evangelical Christian and Muslim communities managed to convince then President Bharrat Jagdeo not to assent to the bill but to send it back to the National Assembly for reconsideration. The bill came up in Parliament again in 2003, and this was a key moment in SASOD's genesis.”

On June 7, 2003, SASOD hosted a forum at the National Library to which the entire 65-member National Assembly was individually invited. “We were a motley group of some 10 to 15 students, mostly from the University of Guyana, who signed the invitations to parliamentarians as SASOD,” wrote Simpson. “Only three opposition Members of Parliament came to our forum. But for the small group at the National Library that Saturday, it was an opportunity to have an informed, reasoned discussion about including "sexual orientation" as grounds for protections from discrimination in Article 149 of Guyana's constitution.”

SASOD aims to eradicate all forms of discrimination in Guyana, especially on the grounds of sexual orientation, gender identity and expression, and works closely with sex workers, as well as women, children, marginalised youth and other vulnerable groups.The organisation is a member of the Caribbean Forum for Liberation and Acceptance of Genders and Sexualities (CariFLAGS), the Caribbean Vulnerable Communities Coalition (CVC) and sits on the Caribbean Working Group (CCWG). What are some of the specific challenges faced by sex workers in Guyana?
Sex work is socially stigmatised and sex workers face a high degree of discrimination by the society at large. Also, due to the criminalisation of offences related to sex work, sex workers also face violence and abuse from their clients and the police.

What are the priority areas that SASOD works in? Tell us a bit about the organisation’s area of work specifically, as well as any activism you engage in.
SASOD’s programmatic work is aptly described as the three ‘H’ agenda:

Challenging homophobia(s); SASOD is dedicated to the eradication of homophobia(s), including transphobia, in Guyana and throughout the Caribbean.  We work tirelessly to repeal discriminatory Guyanese laws, change local attitudes about the LGBT community, and end discrimination in the government, workplace, and community. SASOD has, over the past 11 years, continuously applied pressure to Governments and policy makers to rectify laws and structures that do not accommodate LGBT persons. This has been done through sensitisation workshops in workplaces, schools, communities and public spaces where minority populations have felt threatened or ostracised.

Realising human rights - Freedom from discrimination and hate-filled violence is a right for all people. SASOD is committed to promoting the rights of all people, especially those whose voices are marginalised in Guyana today.  Children, women, and LGBT persons have the full support of SASOD with regard to their human rights. SASOD believes in using as many media as possible to spread a no-hate/non-discrimination agenda. Initiatives such as our LGBT Film Festival, SASOD’s Cine Campaign and our “Stand Against Transphobia” event, coupled with documentaries and public awareness campaigns that engage persons at every level, allows SASOD to not only advocate for LGBT rights, but engage the public in a way that is relatable and conducive to changing their attitudes towards LGBT people and propels their understanding of human rights and equality for all people.

Promoting health: SASOD is committed to promoting health and healthy lifestyle practices among LGBT Guyanese.  Prevention of HIV transmission, use of prophylactics, and safe sexual practices are all goals of SASOD's health initiative. The unjust marginalisation of LGBT Guyanese makes this initiative critical for the population as a whole.

Does SASOD work with other sex worker groups in Guyana/elsewhere? In what way?
SASOD is a founding partner and collaborates closely with the local representative organisation, Guyana Sex Work Coalition in media and public advocacy, investigating cases of violence and abuse against sex workers and hosting training programmes for marginalised groups.

What have been some of the best moments in SASOD's history?

Legislative Advocacy
SASOD has been advocating for repealing the laws that discriminate against LGBT people and for laws that protect persons from discrimination based on their sexual orientation and gender identity (SOGI). Currently, the National Assembly has appointed a Special Select Committee on Guyana’s Commitment to the United Nations Human Rights Council with regard to the Abolition of Corporal Punishment in the Schools, the Abolition of the Death Penalty and the Decriminalisation of Consensual Adult Same Sex Relations and Discrimination against Lesbians, Gays, Bisexual and Transgender Persons.

Strategic Litigation
SASOD and four transgender litigants who were arrested and prosecuted for cross-dressing in February 2009 filed a landmark constitutional suit against the Guyana government challenging these punitive laws. Filed on the eve of World Day of Social Justice, February 19, 2010, this is the first case in the Caribbean challenging laws that discriminate against LGBT people. Stabroek News described the motion as “historic.” The case is due for a hearing in April 2013.

SASOD’s Annual LGBT Film Festival
One of SASOD's proudest achievements is its ‘edutainment’ calendar event, is its annual lesbian, gay, bisexual and transgender (LGBT) film festival which started in 2005 and is now in its ninth year. “Painting the Spectrum” is the only annual LGBT film festival in the English-speaking Caribbean. It is held at the Sidewalk Café on Middle Street in Georgetown since its inception.

Guyana Equality Forum (GEF)
SASOD was integral in forming and shaping the Guyana Equality Forum (GEF), which is a loose network of local Civil Society Organisations (CSOs) and grassroots groups who support human rights and equality for all Guyanese, including LGBT citizens. SASOD and GEF led the first pro-LGBT “Walk for Equality” on December 8, 2012, for International Human Rights Day, which was supported by a wide cross-section of CSOs, grassroots groups and UN agencies.

What do you think will be the biggest challenges for SASOD and for sex workers in the Caribbean in the future?
The biggest challenges include repealing laws that criminalise same-sex intimacy, cross-dressing and offences related to sex work. Due to our Commonwealth colonial heritage, these laws are very common across the English-speaking Caribbean territories and have similar odious effects.