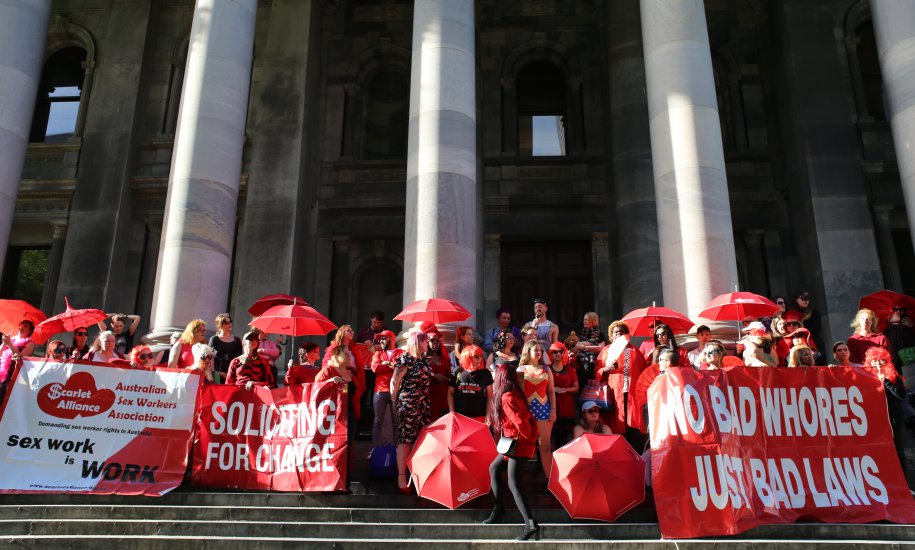 Jules explained, “previously Scarlet Alliance was funded for regional peer-to-peer capacity building programmes [...] in places such as Timor Leste and Papua New Guinea. But more recently, with changes to Australia’s Foreign Aid budget, these partnership programmes are no longer funded. Since these budget cuts in 2014, which saw $carlet Timor no longer funded through the Australian government and a massive reduction in funds for Friends Frangipani, an even larger proportion of Australia’s ‘overseas development aid’ goes to the offshore immigration detention of refugees and asylum seekers.”

One of the international areas Scarlet Alliance works with is the migration project with Empower Thailand. Since 2009, Scarlet Alliance’s Migration Project has worked in partnership with Empower’s Chaing Mai to provide legal and migration information to sex workers in Thailand considering travelling abroad for work. The successful partnership with Empower Foundation in Thailand has strengthen ties and continued to serve as an important conduit for reliable information and referrals for sex workers considering travelling for work to Australia.

What is the history of Scarlet Alliance? How and why was it formed?

Sex workers who were organising at a state and territory level in Australia during the 1980s saw a range of potential benefits that could come from forming a national network. Forming an umbrella organisation at the national level was seen as a way to better facilitate the sharing of relevant information between states and territories, to allow for stronger work to be done at a national level, and to connect internationally with sex worker organisations and the global movement.

Each state and territory in Australia has its own approach when it comes to laws and policies regarding the sex industry. Noting discriminatory and unjust special criminal laws targeting sex workers remaining on the law books in each jurisdiction. At the same time however, Jules explained to NSWP that national level health policies and laws also impact sex workers. For example, migration and visa laws impact sex workers and those are developed at the national level.

Jules says that the idea to start a formal national organisation took its next steps after the first national HIV and sex work conference in Australia with Scarlet Alliance, Australian Sex Workers Association formally registering in 1989.

From the early 1980s, sex workers (along with other key affected communities) were recognising the potential of HIV to devastate sex workers’ lives and livelihoods, and groups in different states and territories began formalising their organisations. Sex workers had already been organising or resisting state control in many ways in their personal lives or as part of broader movements. Sex workers who were involved in activism during the 1970s cite the Lyon occupation of Saint-Nizier church by sex workers as particularly significant.

In 1986, as Julie Bates notes, the Australian Prostitutes Collective in the state of new South Wales (NSW) became the first government funded sex worker-led group. Their goal was to reduce HIV and STIs in the sex industry with PCV (Prostitutes Collective of Victoria) and PASA (Prostitutes Association of South Australia). These organisations were all formed by sex workers to advocate for a range of personal, health, industrial and legal concerns issues facing sex workers. Funding enabled sex worker groups to employ staff, develop larger programmes, and formalise existing peer education approaches based on the tradition of experienced sex workers teaching newcomers. In 1988 the first national sex industry conference (funded by NACAIDS), ‘Sex industry and the AIDS debate’ was held, examining HIV, sex work and the laws. It was there the need for a national organisation was recognised, leading to the formation of Scarlet Alliance.

“Sex workers remain subject to a number of confusing laws on a local, state and federal level that impact every facet of their lives,” says Jules, adding that “sex workers are engaged throughout Australia in law reform and policy development.”

As the national sex worker-led organisation in Australia, Scarlet Alliance aims to achieve equality, social, legal, political, cultural and economic justice for current and former workers in the sex industry.

The majority of Scarlet Alliance’s work is focused on advocacy, representation, and peer education. A small component of their work comprises of direct service delivery, predominantly through the Migrant Sex Work Project in collaboration with Empower Thailand.

Jules explained that Scarlet Alliance’s member organisations (most of whom are based in different states and territories around Australia) generally have a much larger focus on direct service delivery. These services include outreach, new worker training, peer education, advocacy, and training to educate service providers on reducing discrimination towards sex workers and making their services more accessible to sex workers.

Scarlet Alliance does advocacy work in many areas. They advocate for sex workers’ rights in the media, and do political advocacy work at the federal level and in conjunction with members at different State and Territory or Local Council Governments.

Representatives from Scarlet Alliance sit on various governmental advisory mechanisms, such as the Ministerial Advisory Committee on Blood Borne Viruses and Sexually Transmissible Infections (MACBBVS) and the National Roundtable of Human Trafficking and Slavery.

The online training modules around sex worker peer education are just one part of the larger Scarlet Alliance National Training and Assessment Project (SANTAP). Another component of SANTAP is a nationally accredited Diploma, whereby peer educators can be assessed by peers, and awarded a Diploma in recognition of existing demonstrated skills and capabilities they use in their work. Both the SANTAP training certificate and diploma modules were written and/or developed by sex workers.

Mish said that SANTAP aims to increase the number of trained, qualified sex worker peer-educators through providing participants with a deeper understanding and analysis of their work practices and ways in which they can be improved. Former President of Scarlet Alliance, Alina Thomas notes that SANTAP “recognises the skills that sex worker peer educators have developed during the course of their work.” These skill areas can include: project planning, to tailoring health promotion messages and information, to discussing stigma, discrimination and complex laws, to negotiating relationships with other individuals and organisaitons and often managing these relationships in different contexts and in different personal capacities and roles.

How are sex workers meaningfully included in Scarlet Alliance?

“Anyone and everyone involved in Scarlet alliance is a sex worker,” explained Jules, “Scarlet Alliance excludes owners and operators from membership and involvement in the organisation, even if they are also sex workers.”

Paco, the elected Male Sex Worker Representative at Scarlet Alliance added, “sex workers are encouraged to participate via submissions to the organisation's strategic plan. An annual conference open to all members is held each year allowing them to have their voices heard.”

At each year’s National Forum Scarlet Alliance holds its Annual General Meeting (AGM) where the governance committee is elected by members, as well as elected representatives such as the Male Sex Worker Representative. Each position also has a "double" allowing people to mentor each other in different aspects of these roles and also supporting people to contribute in different ways to suit both their own needs and capacity as well as the needs of the organisation.

The AGM is only one component of the National Forum, which is usually held for three days. The event hosts discussions and presentations on key policies and issues affecting sex workers nationally, and allows time for sex workers to run workshops and share skills with each other. Each year a diverse range of sex workers from around Australia attend the National Forum.

The Migration Project is staffed by bilingual migrant sex workers, Miya and Polly. Their work is informed by a migrant sex worker steering committee, with members from Thai, Chinese and Korean language backgrounds.

Aboriginal and Torres Strait Islander sex workers form a working party. In 2015, they delivered a Cultural Awareness training to attendees at the National Forum with another training being planned for National Forum in 2017.

Scarlet Alliance has advocated for years for the federal government to address the lack of resourcing for sex worker-led organisations. They have asked for support to form a steering committee for Aboriginal and Torres Straight Islander sex workers from First Nations from across Australia to be able to come together, and inform policy at National and State levels.

Jules explained that cconsultations are very important and that Scarlet Alliance has a duty to “listen to our membership and our member organisations.”

What were the biggest events or challenges Scarlet Alliance has worked on in the past? E.g. opposing or campaigning for a law; organising an event …?

Law reform is one of the biggest ongoing challenges for Scarlet Alliance, especially since each state and territory in Australia has different sex work laws.

There are constant law reform processes happening in different states and territories and these processes are often at the same time. Jules said that a constant facet of the work of Scarlet Alliance is preventing bad laws from being introduced.

Jules recalled one notable result from advocacy by Scarlet Alliance and its members. They have been forcing public apologies to be made to sex workers. For example, in the Australian state of Tasmania sex workers have some protection under anti-discrimination laws. In this case, a religious organisation, which was discriminating against sex workers, was forced to publicly apologise for their behaviour.

What will be the biggest challenges for Scarlet Alliance in the future?

“Continuing to advocate for the full decriminalisation of sex work in all states and territories in Australia,” said Paco.

“It constantly feels like its one step forward, two steps backwards. Or is it two steps forward, one step backwards?” said Jules. “It feels like we are fighting the same battles. It’s a constant challenge to maintain decriminalisation where we have it, and to get it implemented where it’s needed. There’s so many regressive sex work laws.”

Besides the need for decriminalisation, the widespread stigma and discrimination across many aspects of sex workers lives present a range of ongoing challenges for sex workers in Australia.

“It’s heartening to see more support building for decriminalisation, along with even more evidence for the need to decriminalise sex work,” said Jules, but she notes that it’s also a “constant challenge” to maintain decriminalisation.

De-prioritisation of the importance of community leadership and community-led responses is also a challenge Scarlet Alliance will continue to face in the future. “It’s not to say we need funding to do what we do,” explained Jules, “but it’s a real slap in the face when that funding goes to antis or our detractors to provide services for us.”

Does Scarlet Alliance have a message for the sex worker rights movement? What about for people outside of the movement?

To the those within the sex worker rights movement “keep fighting the good fight” says Jules.

When it comes to those who are outside our movement, Jules talks about the importance of how support is offered to sex workers, emphasising that supporting sex workers should be about supporting us “to speak for ourselves and not speak for us.” As Jules puts it;  “Sex workers are the key stakeholders as our supporters, its important to ensure sex workers have that space at the table.”