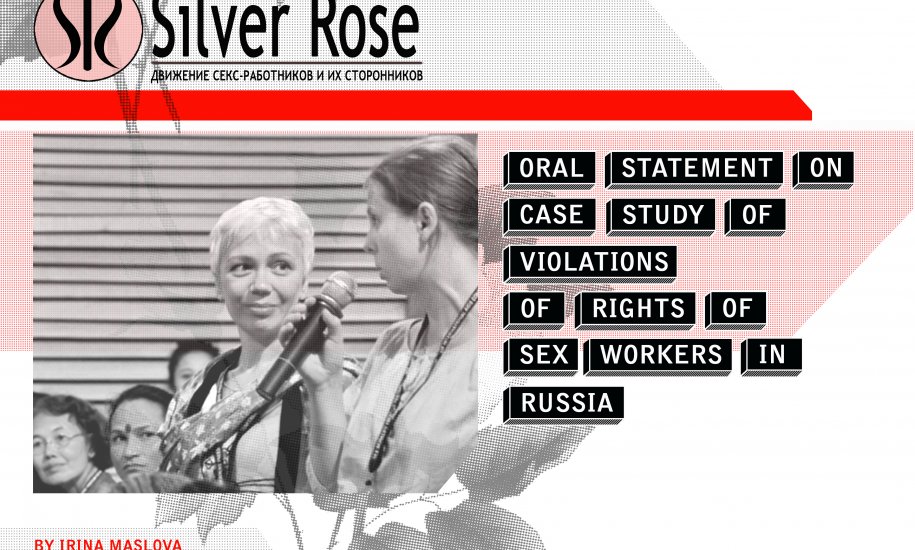 Silver Rose is a sex worker-led organisation and member of NSWP, representing sex workers and their allies. They bring together the leaders of the sex work community and their supporters. “We know what the problems of our community are and what are the solutions in the context of human rights and prevention of socially relevant diseases,” as stated on the Silver Rose website.

The main activities of Silver Rose include:

It is illegal to sell sex and to organise commercial sex in Russia.

The Criminal Code makes it illegal to ‘Keep Brothels and Organise Prostitution’ (Articles 240 and 241).

Sex workers are frequently detained under Article 6.11 for ‘Engagement in Prostitution.’ However, there is a large, open sex industry in many parts of the country due to widespread police corruption.

How did Silver Rose start?

The organisation was founded in May 2003 as a peer-to-peer support group.

During the celebration of the 300th anniversary of St. Petersburg in May 2003, the police raided brothels. The police booked fake appointments with sex workers pretending to be clients. They used fake money as a “test purchase” and then detained the sex workers for 48 hours in a solitary cells. The police then drove the street-based sex workers 200 km away from the center and left them there. It was a part of the police operations to “clean” the city for the celebration.

Raids against sex workers are carried out on a daily basis in Russia. On the eve of some important events, especially international ones, the police intensify raids in order to remove sex workers from the city. For example, during the Olympic Games in Sochi in 2014 the police forced everyone previously detained for ‘Engagement in Prostitution’ to leave the city.

Irina Maslova, founding member, and executive director of Silver Rose, narrates: “during this 48 hours in a solitary cell I understood what it was like to lack freedom. And I understood that this system, when you owe to everyone, should be changed. No organisation could provide us the legal advice at that time. 8 of us teamed up and decided to ruin this state system.”

Since then the peer-to-peer support group has gathered every Saturday to discuss and share problems and legal issues arising from the raids. The group operated until 2005, when the Global Fund came to Russia and funded and implemented harm reduction programmes. Within the programmes of the Global Fund the preventive programmes for sex workers were implemented. Those programmes were about HIV prevention. Non-governmental workers were doing outreach to street-based sex workers. They distributed condoms and explained how to sex workers should protect themselves. In 2005, a training on HIV prevention among sex workers was held in Russia for the first time. The training was organised by Global Fund and many large and important organisations participated. Nineteen sex workers attended the training as well as non-governmental organisation (NGO) representatives and doctors. Sex workers were not included in the development of the training. There were separate sessions for sex workers, NGO representatives and doctors. At the time, the Russian government only saw sex workers from the standpoint of public health and HIV prevention.

In 2005, Irina was also volunteering for the NGO Stilit. This organisation worked with indoor-based sex workers.

“So I ended up in an HIV center,” said Irina,”out of 19 people that attended the training in 2005, only 3 came to the HIV center, 2 of them left later. I stayed. I understood that if we want to change something it should be done through service providers or through public health system, but always uniting people from the community”.

In 2011 there was a training funded and organised by UNFPA and 19 sex workers from Silver Rose attended it. The training was about HIV prevention through peer-to-peer education. As a result of the training, peer-to-peer support groups teamed up in 6 cities and in 3 cities sex workers started to implement HIV prevention programmes without any funding.

In 2012, UNFPA organised a meeting between sex workers and decisions makers, to discuss the meaningful participation of sex workers in the development and implementation of HIV programming in Russia. More than 25 sex workers from Silver Rose attended the meeting. “But the reality and the singularity of the Russian politic is such that no decision makers attended the training,” said Irina.

Some Members of Parliament were supposed to visit the workshop, as well as Ministry of Interior, Ministry of Health, Ministry of Labour representatives. At that meeting Silver Rose discussed the strategy they would implement for the next three years.

After that Irina and other activists decided to organise and to unite, to create their own website and to register their own sex worker-led organisation.

Since 2014, Silver Rose is a member of the Country Coordinating Mechanism and the last Global Fund grant is taking into consideration the interests of sex workers.

What are some of the biggest challenges faced by Silver Rose?

“When we made the decision to register our organisation, we expected it would be difficult, but we did not expect it to be so hard,” said Irina. Silver Rose tried to register twice officially, and twice they were denied. The reason of the rejection was the absence of the profession of sex worker in the classifier of professions of 1994. The classifier defines and lists all the professions in Russia.

“They also claimed that this registration would incite ethnic and religious hatred and that they don't understand who sex workers are,” continued Irina. In 2016, Silver Rose is planning to initiate the process of registration again. In the case of another refusal, they hope to appeal the decision in the European Court.

If registered officially, Silver Rose could introduce to the State Duma (lower house of the Federal Assembly) a bill on the decriminalisation of sex work in Russia. The registration would allow Silver Rose to receive state funding and it would make it easier to receive international funding. It would also increase the visibility and the relevance of Silver Rose, as well as force Russian State to recognise the existence of three million of sex workers in Russia.

The Russian ‘foreign agent’ law, introduced in 2012, puts Silver Rose under the constant threat of prohibition. The law authorises the Ministry of Justice to register independent groups as ‘foreign agents’ without their consent. They will do so if the ministry regards the organisations as engaged in ‘political activity’ and if the organisation is receiving foreign funding. The ‘foreign agent label’ increases registration barriers for NGOs in Russia. This includes restrictions on foreigners and stateless people from establishing or even participating in the organisation. An NGO must then submit themselves to extensive audits. Supervisory powers are allowed to intervene and interrupt the internal affairs of the NGO with suspensions for up to 6 months.

Once labeled as ‘foreign agents’, organisations are obliged to mark all their publications and to begin each oral statement with a disclosure that it is being given by a ‘foreign agent’. It also limits the way a foreign organisation can make tax-exempt donations to specific people or the NGO by requiring them to register and be placed on a very limited list of approved organisations. NGOs are sometimes raided by state official, and those raids are often televised to the general public.

Notwithstanding these barriers to registration and being labeled a ‘foreign agent’, the criminalisation of sex work is definitely the biggest obstacle faced by Silver Rose and sex workers in Russia. The clients of sex workers are not criminalised, but many people propose laws that would criminalise clients.

Another challenge faced by Silver Rose is the retention of their volunteers. “When people first come to us, they are inspired and they become stronger advocates. But after some time they leave. We are constantly looking for new people. Our activists are changing their occupation and then changing their lives,” said Irina. What are some of the achievements of Silver Rose?

“We are promoting the Sex Worker Implementation Tool (SWIT) in Russia. This year during the 5th Eastern Europe and Central Asia AIDS Conference in Moscow, there was a separate session on HIV prevention among sex workers. This is the first time there is a sex worker-only space at a conference in Moscow,” said Irina.

In 2015 Silver Rose submitted a report for the United Nations Committee on the Elimination of Discrimination against Women (CEDAW) and “we got the recommendations for Russian government to repeal the article 6.11 of the law criminalising sex workers in Russia. Previously CEDAW never issued such direct recommendations,” said Irina. “We also succeed to get the recommendation from CEDAW to introduce substitution methadone therapy for people that use drugs in Russia. More than 60% of street-based sex workers in St Petersburg are HIV-positive and most of them are injection drug users. Methadone therapy would significantly improve the quality of their lives,” she continued.

Silver Rose is gaining political power in Russia, they are taken into consideration, and they are interviewed frequently in the media. They have succeeded in helping sex workers put their perpetrators in jail. They have members in many cities in Russia.

How do you see the organisation in 10 years?

In 10 years, Silver Rose hopes to finally have official registration. They would like state funding from the government with their own office, women's center, with medical license to provide health care services, with their own in house lawyer. They also hope article 6.11 of the law will be repealed.

What message do you have for those outside of the sex workers’ rights movement?

“I won't give up until sex work is decriminalised in Russia, even though i will be burned at the stake as a witch,” said Irina.