Sex workers in Amsterdam are calling on the Amsterdam Museum to close a new exhibition, ‘No.1 Tourist Attraction’, criticising its content and use of stigmatising language. The exhibition, created by Nordic Model activist Jimini Hignett, is planned to run until March 2020, despite protests from sex workers and allies.

The exhibition was sharply criticised by sex worker groups for encouraging visitors to carve their initials into a replica of the famous Belle statue. The statue, created by Mariska Majoor from the Prostitution Information Center (PIC) to honour the sex workers of the world, was unveiled in the Amsterdam Red Light District in 2007. The replica was created and used in the exhibition without copyright permission, and has since been removed from the exhibition after PIC raised concerns.

In a letter sent to the Amsterdam Museum last week, PIC said:

"Tellingly, your website says: “Hignett has invited people to pick up a chisel or a knife and carve their initials or a heart into her sculpture’s wooden body.”  You may not be aware of the daily stigma that sex workers experience, even in the legalized context of Amsterdam.  Sex worker organization PROUD, together with Soa Aids Nederland, recently published a study about it.  Among other things, the study shows how difficult it is for sex workers to report to the police violence perpetrated against either during or off work.  Immediately after having read the information about this exhibition on your website, one of our team members said: “An exhibit like this makes me fear for my physical safety. If people are encouraged to carve into a wooden statue of an independent worker, why wouldn’t they think it’s ok to harm one in real life?” 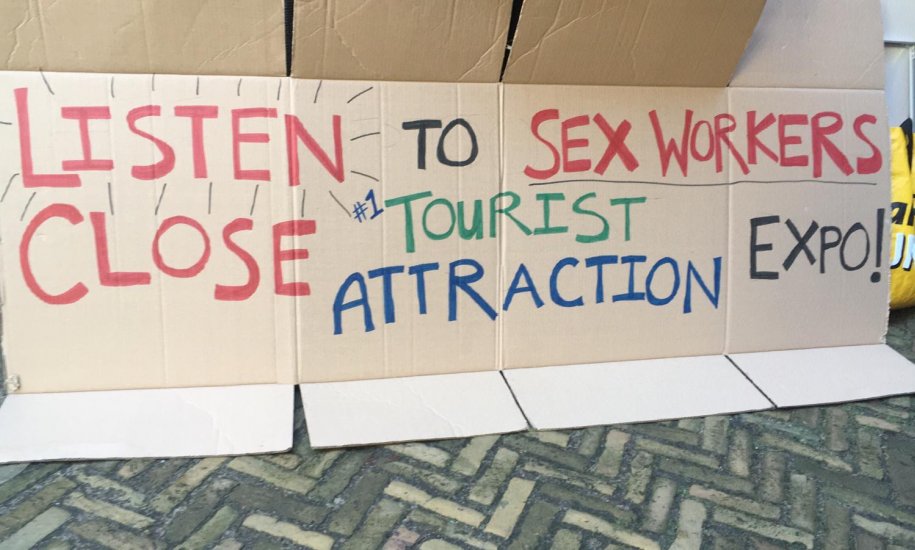 PIC has also criticised the exhibition's content, as it includes videos of sex workers which PIC has reported were gathered unethically. It also features images of sex workers wearing brown bags over their faces, as a reference to “bag-over-head torture”.

"I did not know, nor my colleagues, that she was a feminist who claims sex work is exploitation. I do NOT agree that she uses our conversations in her exhibition."

The exhibition has also been criticised for containing factual errors and misinformation within the text it displays. The exhibition displays information calling for the introduction of the ‘Nordic Model’, which criminalises sex workers’ clients, and makes use of items purchased at the PIC while misrepresenting the views of the sex worker rights movement. ​Hignett said she withdrew the Belle statue replica in order to not "distract from the wider discussion about prostitution in general…Dutch policy and about the Nordic model". In their press release, PIC said:

"... sex workers immediately realised that this was not about art, but about content. Long pages full of anti-prostitution texts that we know all too well from the "abolitionist radical feminist angle". They want total abolition of prostitution, but pack it conveniently in "we are concerned about the victims of forced prostitution." In addition to the hate speech texts, there were also demonstrable lies in the texts."

PIC went on to say:

“We knew the Amsterdam Museum as an inclusive place, where there is also room for the LGBT community (for example), and we feel very betrayed by the nature of this exhibition. Minorities simply know that if the hatred against them increases, lack of safety also increases. "Stigma kills" applies in sex work. It is precisely an exhibition that wants to have an eye for violence against sex workers that achieves the opposite effect. The exhibition contributes to our lack of safety. Totally unworthy for the museum, the grant providers, but also the city of Amsterdam itself.”

The exhibition is on display at a time when the Dutch government is considering reforms to its sex work laws, including requiring sex workers to register with the government in order to work legally.