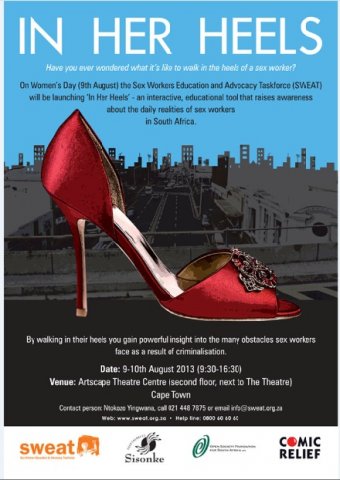 On 9 August 2013, South Africa’s National Women’s Day, the Sex Workers Education and Advocacy Taskforce (SWEAT) and the country’s sex worker movement Sisonke launched the 'In Her Heels' toolkit, at the Artscape Women/Humanity Arts Festival. ‘In Her Heels’ is a sensitisation training tool that puts participants in sex workers’ heels – using story cards and different scenarios that are based on sex workers real life stories. The two-day launch saw approximately 73 participants (some men) take part.

When a participant arrived they were asked to select one of the five identities. Each identity card ended with a Go to Violent Strike 1 instruction. The participant would then select a pair of high heels, which were provided, before entering the ‘In Her Heels’ workshop space. This was to help the participant truly experience walking in their character’s heels.

One of the participants that cried while going through ‘In Her Heels’ said, ‘Her story touched me because it also happened to me’, referring to her own rape. Another commented on the strength of the sex worker who inspired one of the stories, ‘I read the story about Natasha. She faced a lot of challenges, but didn’t give up until she got what she wanted’.

SWEAT hopes to use ‘In Her Heels’ in sensitisation trainings with police, health care-givers, and the general public. The toolkit was also showcased at the Women’s Circle in Delft on the 26th of August, as part of that community’s Women’s Month Event.

The ‘In Her Heels’ launch was covered by local media and international sex worker movements; West Cape News and the Global Network of Sex Work Projects. For more photographs of the launch visit this SWEAT Facebook page album.