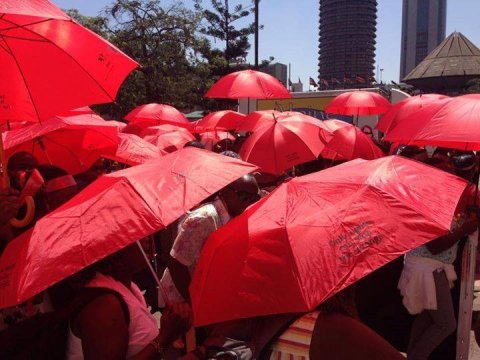 The Red Umbrella is the worldwide symbol of the sex workers’ rights movement. It came into existence as the movement’s symbol in 6 - 8 June 2001 in Italy, during the 49th Venice Biennale of Art. Sex workers from different countries (Taiwan, Thailand, Italy, Cambodia, Germany, the USA and Austria) gathered for an event organised in part by the Comitato per i Diritti Civili delle Prostitute from Pordenone, and marched through the streets of Venice with red umbrellas. The so-called World Congress of sex workers took part in an art installation created by the Slovenian artist Tadej Pogachar. This was set up in a public area in Giardini under a tent called the "Prostitutes 'Pavilion".  Activists organised video projections, exhibitions, performances, street theater, and distribution of printed materials. Italian sex worker activist Pia Covre motivated the use of red umbrellas for the march:

"We had to cross the city from the biennale to the Art Gallery exhibition so we thought crossing the city with a red umbrella would make us visible. Venice is full of tourists so we wanted to be visible from the rest of the people on the streets"

Later, other explanations were given. For some sex workers, red is the colour of love, while others state that the umbrella symbolises protection.

In October 2005, during the European sex workers’ Brussels conference, the red umbrella was used again as a symbol. The European network ICRSE finally adopted it and it is now used in most parts of the world.