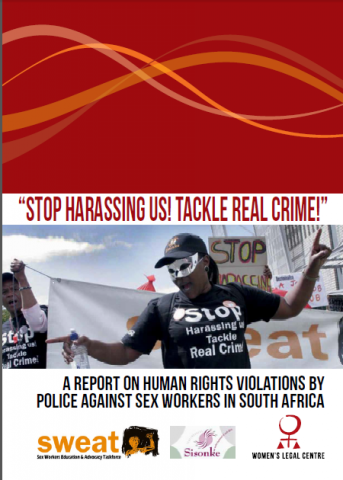 This report draws on the voices of 308 sex workers from Cape Town, Johannesburg, Pretoria, Durban and Limpopo, who approached WLC for information on their rights or legal assistance between September 2009 and July 2011.

The report revealed that police abuse of sex workers in South Africa is systemic and widespread. Almost 70% of the research participants reported having experienced some form of abuse at the hands of police. Theycomplained of unlawful arrests, harassment, physical assaults, sexual abuse and extortion.

A sex worker in Cape Town reported, “One day I was standing on one of the corners, the police came and asked what I was doing there and who I was waiting for, then they put me in the van and told me that they were taking me to the police station, but instead they took me back off the street and wanted sexual favours, and both of them had no tame tags.”

“The human rights abuses of sex workers in South Africa is alarming and demands immediate attention” says Stacey-Leigh Manoek, an attorney at the WLC and author of the report. Manoek added that the research showed that the existing legal framework of criminalisation in South Africa is unacceptably liable to police discretion and encourages police corruption and abuse.

The report makes recommendations to the South African government to decriminalise sex work.