A new law criminalising clients has come into effect in Israel. The law, which was approved a year and a half ago by the Knesset, punishes those caught seeking the services of sex workers, as well as those apprehended in a location chiefly used for sex work.

Argaman Alliance and Transiyot Israel – local grassroots organisations of sex workers of all faiths, colors, genders, and citizenship status – have published a statement which condemns the new law and calls out the lack of sex worker involvement in policy processes. An extract of the statement is below and you can read the full statement on the ICRSE website. 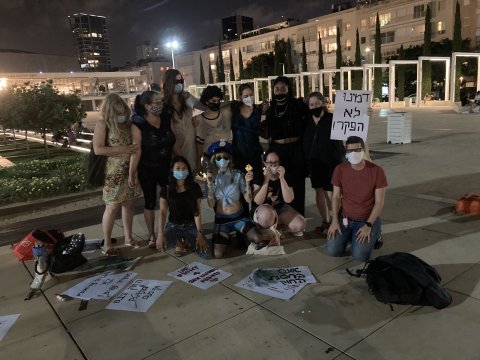 “On July 10, 2020, the law criminalising the purchase of sexual services came into effect in Israel…The final bill, which passed in the Knesset on Dec. 31, 2018, criminalises the purchase of sex, and offers rehabilitation programs only to clients. The “rehabilitation” program for sex workers was announced in a government decision. Legislators acknowledged that “rehabilitation” programs for sex workers are a necessary precondition for implementing the ban on clients. Therefore, the law was scheduled to come into effect only 18 months after it passed in the Knesset in order to allow the government to implement the “rehabilitation” programs before police enforcement begins. However, to this day, most of these programs have not been carried out.

In February, five months before the ban came into effect, we presented an interim report on violence against sex workers, including police brutality, and various negative effects of the law on sex workers. We called the government to postpone the ban for 24 months. We also demanded grant amnesty for prostitution-related offenses, and that our organisations be part of any policy processes affecting us.

We have no chance of finding alternative livelihoods when 1 out of every 5 Israelis is unemployed and we have criminal records that mark us as prostitutes. Due to the failure of the government to create welfare and other provisions to minimize the negative effects of the law, many rights groups have joined the call to postpone the start date of the ban. These include all Israeli LGBTQ organizations, feminist groups – Achoti Movement, Isha l'Isha – Haifa Feminist Center, Israel Women’s Forum, aid groups working with sex workers – Elem and HerAcademy, as well as social workers and law professionals. While these groups hold various views on sex work, they all share the concern that under current conditions, the law sentences thousands of sex workers to life-threatening poverty and violence.

On June 29, the Knesset Constitution, Law and Justice Committee discussed the state of affairs and the appeals to postpone the start date of the ban. We were shocked to see a former Knesset member and a former lobbyist sitting with Knesset members and government officials around the table. While they were given the opportunity to speak, we had to watch the proceedings by internet, and were not allowed to speak. We were especially hurt hearing feminist representatives from the Left eager to start police enforcement, ignoring the harm we already endure from over-policing. Finally, without hearing us, the Minister of Justice decided not to postpone the start date of the ban.

We are thankful for the support we have, especially from the LGBTQ community. Yet we are deeply disappointed with many local rights groups that ignored us and our struggle for basic human rights and against police brutality. We are especially disappointed with Israeli NGOs working on human rights of undocumented migrants and asylum seekers who turned their backs on us, even though a large number of undocumented persons in Israel rely on sex work for survival. The Association for Civil Rights in Israel also decided to remain silent, despite the information and evidence we presented. Even the Israeli Amnesty International branch consistently ignored us, and maintained their position in support of the sex buyer criminalisation law, contrary to Amnesty International's call for full decriminalisation.”