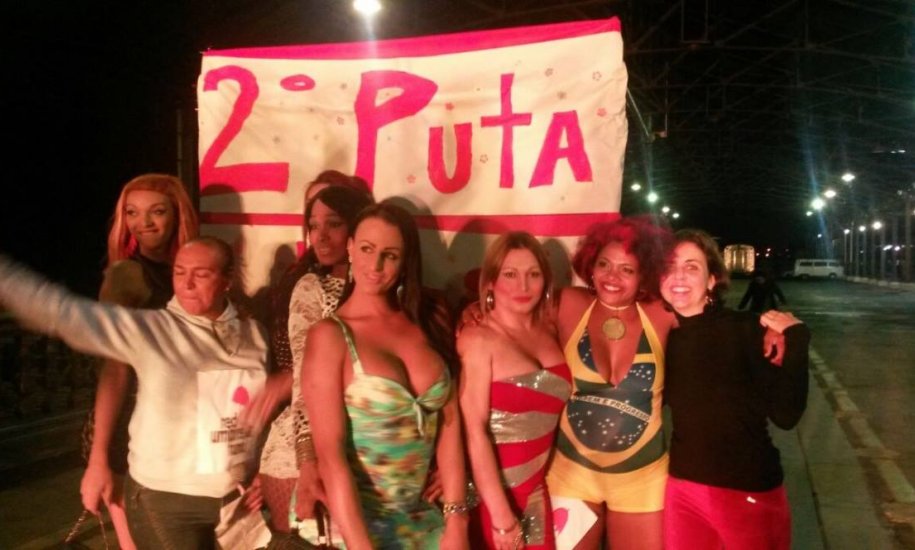 Using the slogan #zerodiscrimination: join the transformation, launched by UNAIDS last year, the sex worker group Gempac organised a political advocacy event. This included a workshop on expressions of sex work, which are often negative and offensive, a demonstration in front of the headquarters, a parade through the old, bohemian part of town, and a run, attracting a lot of attention. Back at the headquarters during the evening, sex workers and allies held a performance about discrimination and hypocrisy and sang songs with critical lyrics concerning machismo, racism, homophobia, environmental degradation, exploitation of labour, and medicalisation. Feminists, people from the LGBT community and artists were present during the day, strengthening partnership with GEMPAC sex workers, which created a neologism adopted all over Brazil: the 'Puta Dei' (puta for 'whore' and as a synonym for excellent, followed by Dei, which sounds like Day and means to give a sexual sense). Leila Barreto, one of the organisers, said that this June 2nd "was “the best in years, since our voices were heard and our struggle for rights and dignity gained a lot of visibility."

The Association Women Warriors (Mulheres Guerreiras) promoted an event at a cultural centre taking place in a train station. A bus brought female and trans sex workers from Itatinga Garden, the sex work area of Campinas. A pulpit was improvised on a small railway vehicle from which sex workers complained about something that makes them mad. Betania Santos, one of the coordinators of the association, criticised the closure of bars and hotels by local government, leaving women with a hard time to find places to meet and attend clients. There were musical performances and a tribute to Gabriela Leite. A Daspu parade, with more than 20 transvestites and sex workers walking the catwalk of the brand created by Davida, thrilled the audience. For Betania, the highlights of the event were the participation of a great number of sex workers and the wide range of feminist allies, including legal and popular prosecutors who work with the issue of domestic violence, members of the SlutWalk, of the Domestic Workers Union, and the staff of the local headquarters of a federation of unions (CUT), where the association is based. The event had the support of state and local HIV/AIDS and STI departments.

On June 2nd, sex workers from the local organisation, NEP, delivered leaflets about Sex Workers’s Day for colleagues who work on the streets, giving away 200 chocolate candies. They also offered the leaflets (not the candies) to municipal employees on strike gathered in front of public buildings, in order to draw attention of the population to the issue of sex workers’ rights. On the 9th, a public audience in the local Parliament brought together 120 people, listening to trans and female sex workers, feminists and researchers speaking about stigma, health, rights, legal regulation and activism.

Two hundred roses and 300 papers were distributed in 20 brothels. If these are the quantitative data of the action promoted by Davida in downtown Rio, political results were even more important. Sex Workers who did not know about International Sex Worker’s Day considered that they deserve the celebration and that it stimulates the struggle for their rights. The ones who did know about it, and they were many, reinforced ties with the organised movement. Beijo da rua (Street Kiss) journal about the impact of the Brazil World Cup in commercial sex was received with great interest. Some clients drinking in the brothels took the opportunity to congratulate their partners. Most of the sex workers were full of emotion as the roses was being offered. One of them offered the flower to the Afrobrazilian goddess Pombagira sculpture, displayed on the altar of one of the brothels, which personifies female beauty, sexuality, and desire, and is associated with sex workers.