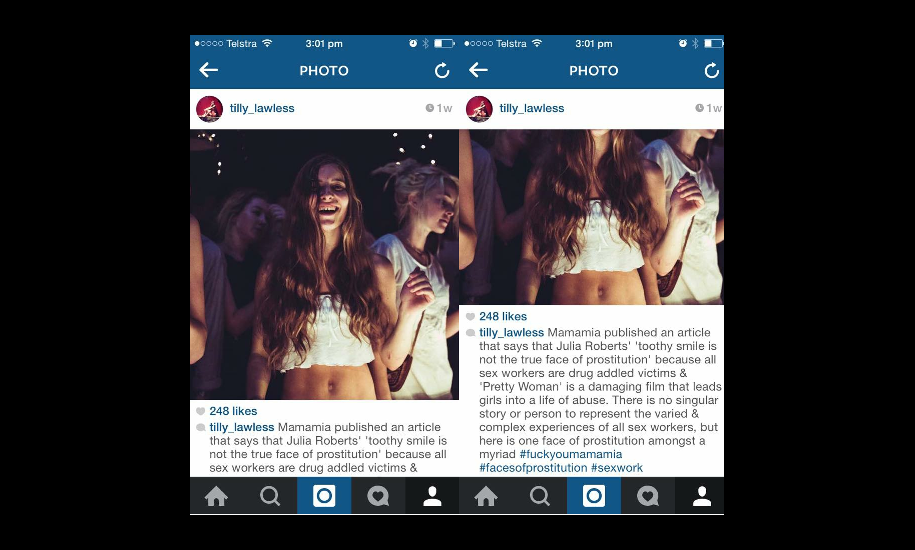 The #FacesOfProstitution hashtag has been filling up social media timelines since March 29th  when a Sydney based sex worker started it in response to an offensive blog post by a fundamentalist Christian organisation was reposted on Mamamia, a popular Australian online women’s magazine. The hashtag trended worldwide on BBC Trending  and has united sex workers across the globe in solidarity against the offensive stereotypes employed by anti-sex work campaigners to undermine the power of sex workers. These tired old stereotypes are wheeled out at various times and for this particular occasion it was the anniversary of the film Pretty Woman; a fictional portrayal of two people falling in love in challenging circumstances.  The week in which Pretty Woman turned 25 threw up many articles decrying the film’s supposed “romanticising of prostitution” and its “glamorising of prostitution” each article clamouring desperately to hijack the film claiming it tells a sex trafficking story. Anything nowadays goes when articles conflate trafficking with sex work; especially when articles can erase sex worker voices and experiences in favour for a juicier more perverse narrative to suit Nordic Model supporters’ aims.  One blogger even wrote an open letter to Richard Gere. It was also a week in which another powerful sex worker-driven campaign spread across the world to challenge offensive stereotypes employed by those who purport wanting to ‘help sex workers’.

The campaign has been growing organically when sex workers in Australia took issue with a blog post from Exodus Cry republished on the Mamamia website on 24th of March. The offensive blog post (since removed from the Mamamia website and not directly linked to in this article) argues the film Pretty Woman glorifies prostitution and “lured [women] into the sex industry by leading them to believe that prostitution was glamorous and romantic.”

A Sydney sex worker Tilly Lawless started the #FacesOfProstitution hashtag on Sunday in response to the Mamamia article. Tilly was angered by the way the piece "generalised sex workers" and "depicted all prostitution as harmful". Tilly has been working as a sex worker for two years but only started identifying publicly as a sex worker two months ago in Sydney, where sex work is legal. She decided to post a picture of herself on her Instagram feed to show another face of sex work - the face of a young woman who had made an informed choice to be a sex worker - as a protest against the blog adding the #FacesOfProstitution hashtag.

Tilly also posted the photo and hashtag in the Facebook group pages of Scarlett Alliance - the Australian Sex Worker's Association – other sex workers then asked if they could use the hashtag on Twitter. Then it began: a mass of hundreds of mostly Australian and mostly female sex workers posted images showing their faces to the world, many coming out publicly as sex workers on social media for the very first time. Sex workers in other countries soon followed with a number of prominent sex worker activists joining in.

"I was really pleasantly surprised," Lawless told BBC Trending, because sex workers "are very rarely humanised as individuals, so often our bodies are spoken about but putting our faces on social media is such a powerful thing".

Another sex worker responded to the blogpost on Mamamia’s website a few days later arguing that “Confusing these two different topics – sex work and sex slavery – only hurts both sides. It further perpetuates the negative stereotypes and stigma of sex work. It creates confusion and silences us. It makes our fight for workplace rights and to end our discrimination just that little bit harder. And, importantly, it makes the victims of sex trafficking ambiguous.”

At the moment, the momentum is still very much behind the #FacesOfProstitution hashtag thanks to Australian sex workers making such a public stand against those who attack sex workers en masse insisting that we are not representative and that we are not the “real faces of prostitution”. It would be great if we could keep this hashtag going globally and have more sex workers join in. However, due to the criminalised nature of sex work almost everywhere in the world; the resulting stigma and discrimination make it dangerous for sex workers to be open about being involved in sex work. For those who want to take part in taking this hashtag further, if you can’t post a photo of yourself, post a statement about yourself with a non-identifying photo and share it with your network and the wider world.

Photo courtesy of Lilly Lawless and reused her with permission.