International Sex Workers’ Day is held annually to mark the 1975 occupation of Saint-Nizier Church in Lyon, France, by around 100 sex workers, protesting their criminalised and exploitative living conditions. Sex workers continue to mark the day every year with events and actions calling for fulfilment of their rights. NSWP focused on the theme of access to justice, launching a new illustrated version of the NSWP Consensus Statement with images by Glasgow-based visual artist Molly Hankinson. 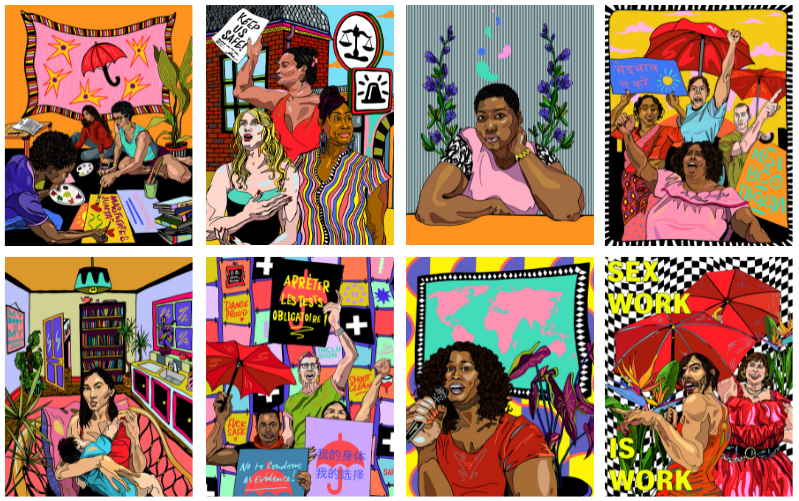 In Kenya, Arms To Lean On (ATLO) ran a webinar on the topic of Access to Social Justice for Sex Workers.

NSWP members SWEAT, ASWA and Sisonke joined with GNP+, UNAIDS, UNFPA, ILO, Prevention Coalition, Redtrasex and the Global Fund to commemorate International Sex Workers Day with a webinar on Eliminating HIV-Related Stigma and Discrimination Against Sex Workers. The webinar focussed on challenges faced by sex workers, rights violations, and interventions to eliminate HIV-related stigma and discrimination for sex workers in all their diversities.

AINSW - All India Network of Sex Workers released a statement drawing attention to the marginalised status of sex workers and the bravery and strength of the sex worker rights movement. 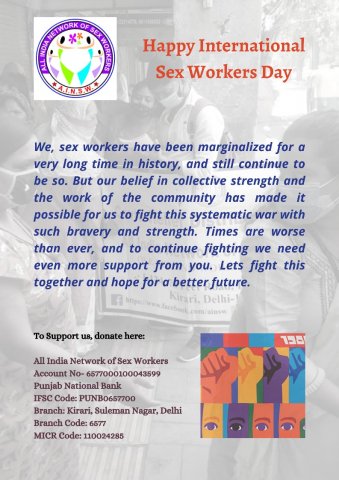 In Australia, Scarlet Alliance celebrated with a Twitter thread of suggestions on how to celebrate the day, including donating to the Scarlet Alliance Emergency Relief fund and signing and sharing the petition to introduce anti-discrimination protections for sex workers in New South Wales.

Organización de Trabajadoras Sexuales OTRAS answered questions live on Instagram for International Sex Workers' Day. They also celebrated a historic win as the Supreme Court of Spain issued a ruling recognising the right of sex workers to form unions. The judges agreed with OTRAS when they consider that its members "enjoy the fundamental right to freedom of association and have the right to organise". 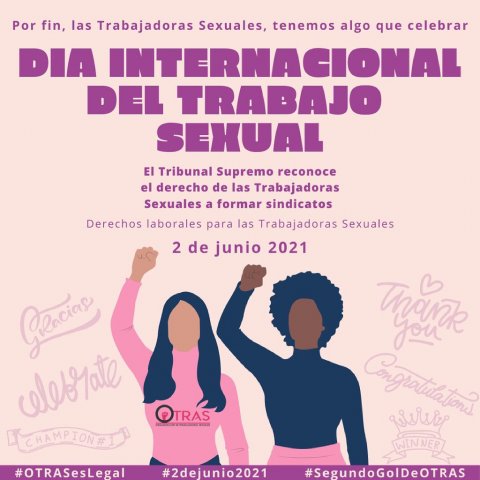 Red Umbrella Sweden marked International Sex Workers' Day with a two day event in Stockholm. On the 1st of June, members and allies protested outside court, demanding sex workers' right to privacy and family. It was a significant day because the partner of one of Red Umbrella Sweden’s members was due to go to jail for living together with a sex worker. On the 2nd of June, Red Umbrella Sweden celebrated with a picnic and a clothing and book swap.

On the eve of ISWD, the Russian Sex Workers Forum addressed the media with a press release, which described the problems of sex workers who do not have access to justice in modern society. As a result of the press release, several media outlets published interviews and analytical materials on this issue.

The participants of the Forum collectively came up with words dedicated to their work and read them out like rap. This track formed the basis of the June 2 video clip. The video was posted on the Russian Sex Worker Forum’s YouTube channel and can be viewed below.

Legalife-Ukraine used the day to draw attention to the problems that sex workers have to face. They prepared a selection of news stories including the Equality Model vs Decriminalisation and a video with leading Ukrainian human rights experts on the impact of bans and punitive policies on sex workers.

TAMPEP, the European Network for the Promotion of Rights and Health among Migrant Sex Workers, announced the launch of the campaign Europe has forgotten the Human Rights of Migrant Sex Workers by presenting the campaign’s first Declaration in different languages and a petition for endorsement. https://tampep.eu/campaign

They ask allies who support the fundamental rights of all persons, including society‘s most vulnerable ones, to take the time to stand up for migrant Sex Workers in Europe.

Regional network PLAPERTS launched a campaign calling for labour rights to be heard and respected. They published the video, below, to launch the campaign.

La Organización de Trabajadoras del Sexo de El Salvador ran an information table on "economic justice for sex workers"; took part in an interview with feminist radio on impacts on health, and the economy of women workers post-pandemic; and prepared and published social media posts on the current context that sex workers face in the face of the measures from the new government.

Best Practices Policy Project encouraged solidarity with Ugandan sex worker-led groups that are working to protect the rights of sex workers by asking everyone to reject the Ugandan Sexual Offences Bill of 2021. This new legislation harshly affects sex workers, criminalising brothels, engaging in prostitution and engaging in a sexual act with a sex worker. The legislation also criminalises ‘carnal knowledge against the order of nature” fuelling anti-LGBTQ discrimination and heteronormative policing of sexuality. Download a statement from Ugandan Sex Workers.