On Monday 23 September 2019, Heads of State and governments will meet for the UN High Level Meeting (HLM) on Universal Health Coverage (UHC) to secure commitment to prioritise universal health coverage, and the Political Declaration will serve as the basis for global efforts to provide access to affordable and quality health care services going forward.

UHC is enshrined in the Sustainable Development Goals (SDGs) Target 3.8, alongside Target 3.3 to end AIDS by 2030. While the SDGs espouse the ethos of “leave no one behind,” we, as criminalised populations of gay men and other men who have sex with men, people who use drugs, sex workers, and transgender people, demand that governments put the last mile first.

If universal health coverage works for the poorest and most marginalised, including people living with HIV and other key populations, it will work for everyone.

This is why we are calling upon UN Member State representatives attending the HLM on UHC to support key populations by pledging:

Read the full Call to Action in

These pledges build upon remarks delivered by Elie Ballan, Director of M-Coalition, at the UN’s UHC multi-stakeholders hearings in NYC in April this year. In the lead up to the 23 September HLM on UHC, we are now targeting specific UN Member States to demand they include the above pledges in their remarks.

We invite all civil society members to share the Call to Action with their Ministries of Foreign Affairs, Permanent Missions to the UN in New York (see contact information here), Ministries of Health, and other stakeholders to ensure that governments remain committed for a truly inclusive UHC that works for all.

While the Political Declaration will be the outcome document from the UN High Level Meeting, statements delivered by individual countries and in bloc are often much more impactful, because they provide a direct opportunity for follow-up: specific commitments or specific issues that are not included in the Political Declaration, but advocated for in oral remarks, offer an entry point for holding governments accountable in implementation.

Member States will have the opportunity to intervene in the following segments:

When countries raise critical issues around addressing the barriers faced by key populations, including criminalisation, stigma, discrimination, and violence, in their interventions during a High Level UN Meeting, this will give us a powerful leverage point after the meeting to go to our governments and hold them accountable to what they said or committed to in their interventions.

The more countries that commit to supporting key and vulnerable populations in their oral interventions, the more possibility we will have to follow-up at the national, regional, and international levels.

So reach your government representatives NOW and demand action in September at the HLM on UHC!

Sample Tweets to be paired with three graphics:

We’re advocating for #UHC that is inclusive of ALL people at #HLM2019. #UHCLastMileFirst means bringing the human rights of key and vulnerable populations to the foreground

When will [@UN Member State/Representative] commit to #HealthforAll? We need you to support key and vulnerable populations at the #HLM2019 on #UHC! #UHCLastMileFirst

We need [@UN Member State/Representative] to advocate for key and vulnerable populations in #UHC at #HLM2019! Read the Call to Action and pledge to include us in your remarks #UHCLastMileFirst

Key and vulnerable populations deserve access to affordable, stigma-free, and quality health services around the world. When will [@UN Member State/Representative] commit to putting #UHCLastMileFirst? 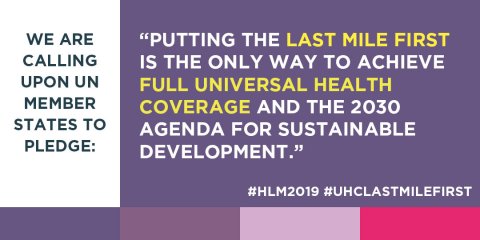 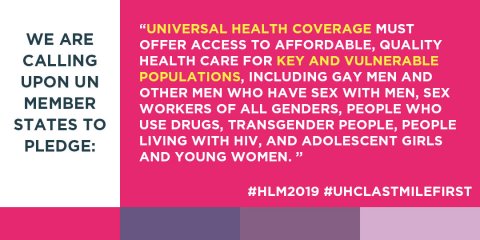 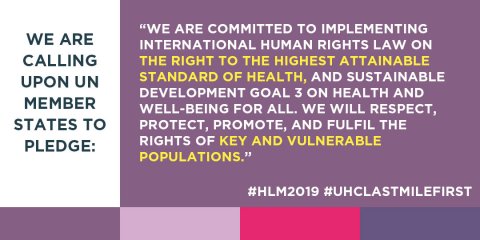