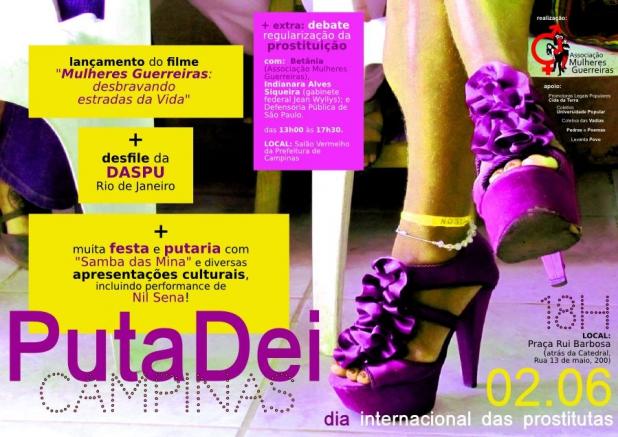 The Rede Brasileira de Prostitutas (Brazilian Network of Prostitutes) is organising a national event to celebrate the International Sex Workers' Day – 02 June – in Brazil. Several events will be taking place in different cities and regions of the country under the name of Puta Dei – wordplay for whore day in Portuguese.

The first Puta Dei ever was created by the Brazilian sex worker-led organisation GEMPAC (Grupo de Mulheres Prostitutas do Estado do Pará) from the city of Belém do Pará, Northern part of Brazil in 2012. That event was inspired by the activism of French sex workers who occupied a church in the city of Lyon, France, 02 June 1975.

The Puta Dei recalls the daily struggle of sex workers for the affirmation of their rights and dignity, many times silenced by society. It calls on the need of tackling discrimination and stigma against sex workers, which are reinforced by the actual federal legislation. As an outcome of self-determination and autonomy of sex workers against institutional and societal repression, the event gained political influence and allies all over Brazil.

Historically, the event was created in 2012 and aimed at disseminating the sex worker blog – Blog das Esquinas – and launching the human rights campaign – Não deixe a luz da esquina se apagar. In 2013, the event focused on the multiplicity of sex workers – a mosaic of differences within the community – calling to mind sex workers from different sectors, settings, social class, gender, and race. Those events were known for debates and actions through art and cultural activities.

On June 2014 the Puta Dei will become a national event with activities taking place in the states of Pará, Minas Gerais, Rio de Janeiro, and São Paulo. The action is coordinated by the Brazilian Network of Prostitutes and is a powerful community mobilisation effort to advocate in favour of the draft law Gabriela Leite that seeks to regulate sex work in Brazil, to be voted by Parliament.

By reaffirming every year its advocacy goals and bringing together sex workers and allies from all over the country, it strengthens efforts and builds up partnerships for rights-based responses to the claims of sex workers.

As an example of that, a public action will take place in the city hall of Campinas, State of São Paulo, organised in partnership with the Public Defender Office. A seminar will be conducted on the regulation of sex work with the direct involvement and participation of sex workers from the biggest prostitution area of Brazil – Jardim Itatinga – amongst them the sex worker leader Betânia Melo. This brave political action reveals the capacity and skills of Brazilian sex workers to organise and react against repression and build up strategic partnerships with relevant state bodies to overcome legal barriers in accessing rights and services.

After the seminar, the sex worker-led association Mulheres Guerreiras, the main organiser of the Puta Dei Campinas, will launch publicly the documentary “Mulheres Guerreiras: desbravando estradas da vida” that tells the story of the sex worker movement in Campinas. It is intended to sensitise key stakeholders and reaffirm the participation of sex workers in policy development.

This local event will be closed with cultural presentations, samba, and Daspu fashion show behind the main church of the city. The new sex worker fashion collection “Daspu na Copa” will be launched, criticising state actions against sex workers during the preparation of the Wold Cup in Brazil (e.g. closing of brothels, prosecution, among others).