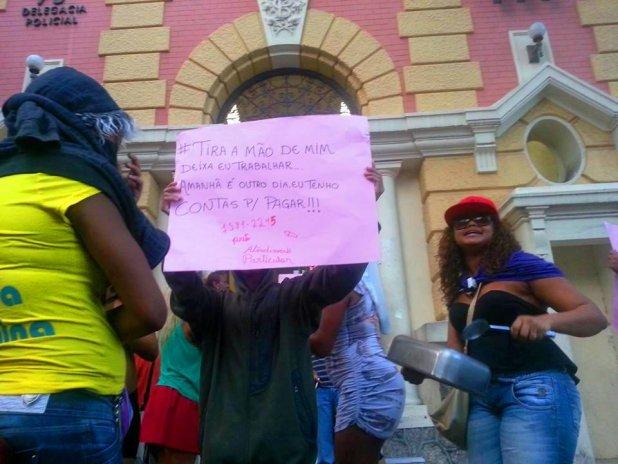 After several street protests against police illegal actions against sex workers in the city of Niteroi, state of Rio de Janeiro, Brazil, on 31 May 2014 the sex worker-led NGO Davida, member of NSWP, organised a Daspu catwalk protest in front of the building where sex workers were arrested on 23 May 2014.

The catwalk protest is part of the several events happening in Brazil during the Puta Dei, a national event in celebration of the International Sex Workers’ Day. The protest is aimed at calling on authorities to recognise the arbitrariness of the police operation in the city of Niteroi and advocating for the regulation of the profession. The Brazilian Prostitution Observatory also published a note regarding the intimidating, violent, and criminalising attitudes of the police in relation to the episode.

On 23 May 2014 the police occupied a building in the centre of Niteroi where sex workers live and work. The building had known sex work venues for about 400 self-organised sex workers. Some sex workers were residents and lost their homes after the illegal operations.

Since sex work is not a crime under Brazilian law, as it is a profession recognised by the Ministry of Labour since 2002, the raid was justified by basing it on the “bad structural conditions and conservation of the installations” of the building. However, the police only closed the four floors where sex workers lived and worked, leaving the remaining six floors undisturbed,

Chief Gláucio Paz da Silva - who was responsible for the operation, signed an order stating that the venues have been used for criminal purposes although he did not specify which crimes. Although the Brazilian Criminal Code bans 'pimping', there was no evidence of any illegal activity in the establishments, as sex workers are self-organised. No perpetrators or witnesses were found, yet more than 200 sex workers were arrested for investigation.

An investigation has been ongoing to find evidence of 'pimping' in the sex work venues of Niteroi. Perversly, the 'investigation of possible illegal activities have focused on blaming and shaming sex workers through police violence, intimidation, and media exposure rather than a full and proper investigation. Adding to these violations at the hands of law enforcement, sex workers have also lost their means to earn a living and their place of work.  Many sex workers are still in custody waiting for investigations to be completed.

The Brazilian Prostitution Observatory stated that the police action is part of a broad gentrification project of the city centre, being supported by several sectors of society that discriminate angainst sex workers and endorse their oppression by law enforcement and state authorities. For that reason, the Daspu catwalk protest on 31 May 2014 was an opportunity for questioning the afairness of the police investigation. It intends to clarify that sex work is work, as recognised by the State, and that any measures such assuch as the police raids in Niteroi violate the civil and human rights of sex workers.