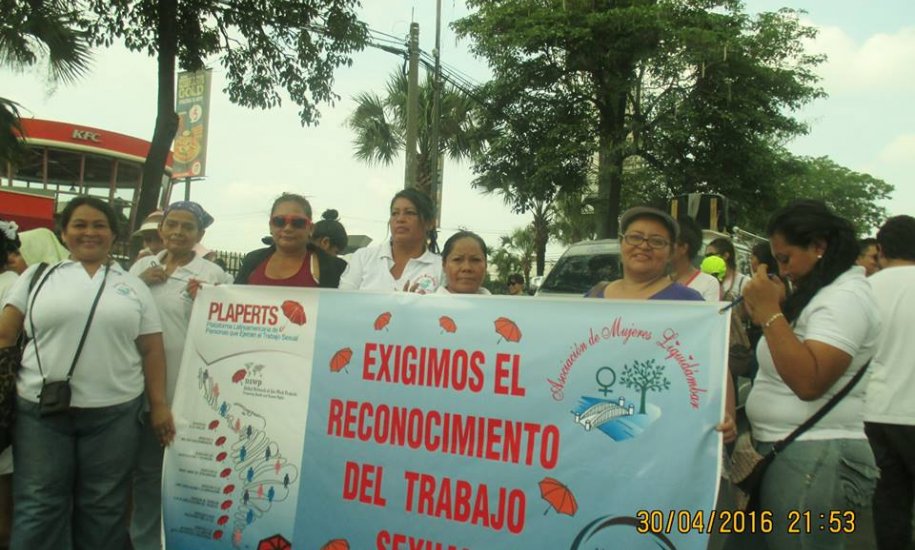 The Latin American Platform of Sex Workers (PLAPERTS) is shocked by the murder of their colleague Angelica Miriam Quintanilla, who was Director of LIQUIDAMBAR, a sex worker-led organisation in El Salvador. In March 2016, sex workers from Brazil, Colombia, Ecuador, Mexico and Peru received the news that LIQUIDAMBAR wanted to join PLAPERTS. Just as quickly, PLAPERTS received news of her murder. The image above shows LIQUIDAMBAR at a protest with PLAPERTS. Angelica is to the far left.

Numerous press releases and statements have been made in the media and on social media. Sex workers in Latin America are outraged at this act of violence. NSWP’s Regional Correspondent in Latin America has asked other activists to gather all the information available on the case, to allow NSWP to report was has happened.

It is only known that on the evening of the 6th of May, 2016 the body of fellow sex worker Angelica Miriam Quintanilla was found on Avenida Independencia in San Salvador with nine bullet wounds. The area where she was found is a known area for sex work, with approximately 500 women working there. They are constantly harassed and suffer violence by the Metropolitan Agents Corps (MAC) and gang members who ask for money to let them work in the area.

Violence against women is widespread in El Salvador. The high rate of violence, lack of legal complaint procedures and police impunity are factors that hinder progress in addressing this serious violation of the human rights of women, including sex workers. The National Civil Police (NCP) has raised the possibility that this murder is the result of an attack by a group of gangsters or by a quarrel that she may have had with some of her customers. According to sex workers in the area, it is unacceptable to them that the authorities ruled out femicide.

Over 13,000 Salvadoran sex workers demand the recognition of sex work as work like any other to access labor rights.

In the words of various leaders, like Karina Bravo from Ecuador, this “tireless warrior was foully murdered for denouncing the violence that female sex workers face, and disagreeing with issues that destroy and kill organisations.”

Tamaulipas Diversidad Vihda Trans, A.C. stated they “condemn the murder of our fellow sex worker and human rights activist, we are being killed and the authorities do nothing, we will not get tired of demanding justice. We stand in solidarity with the demands of our fellows from El Salvador, we will continue raising our voices. ¡Ni una muerta más! Not one more dead woman!” said Ana Karen Lopez Quintana.

The community of sex workers in Latin America stand by the demands of their colleagues in El Salvador and send them their condolences. “We ask for justice so that the murderer of our beloved colleague can be found and we add ourselves to any and all of the necessary mobilisations to demand for Justice,” finished Ana Karen Lopez Quintana.