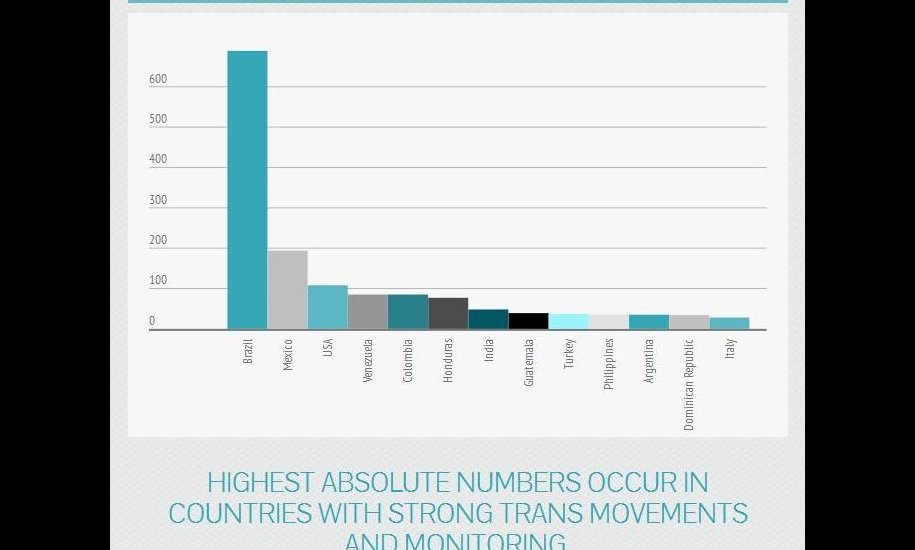 Transgender Europe’s Trans Murder Monitoring project (TMM) has just published a report in advance of the International Day Against Homophobia, Transphobia and Biphobia (IDAHOT), which will be marked on the 17th of May 2015. The report details a total of 1,731 cases of reported killings of trans and gender-diverse people from January 1st 2008 to December 31st 2014 in all regions of the world. Analysis of the data shows that 65 percent of all murdered trans and gender-diverse people (whose profession was known) were sex workers.

The report follows a period when a spate of murders of trans sex workers have come to the attention of the sex worker community across the world. For example: in July 2013 Dora Özerin was murdered in Turkey; in the Philippines last year Jennifer Laude was murdered, allegedly by a US Marine, while in the USA, the first couple of months of this year saw the number of reported murders of trans women at a rate of one per a week – many of whom were sex workers.

TMM’s report noted the level of aggression used in these murders: “While the actual circumstances of the killings often remain unknown due to a lack of investigation and reports, many of the cases documented involve an extreme degree of aggression, including torture and mutilation. Many cases are not investigated properly by the authorities and many have hardly received any public attention at all.”

Paradoxically, the report found that higher numbers of reported attacks against trans and gender-diverse people were found in countries with stronger trans communities, due to better monitoring in those places. “The highest absolute numbers,” reports TMM, “have been found in countries where strong trans and gender diverse people’s movements and/or LGBT organisations do professional monitoring. This correlation points to the unknown number of unreported cases.”

While Brazil (689), Mexico (194) and the USA (108), which are large countries with high populations, have the highest absolute numbers (accounting for 57 percent of all reported cases worldwide), an examination of the relative numbers produces worrying results for smaller countries. Honduras, for instance, has a rate of 9.32 reported trans killings per million inhabitant the Dominican Republic a rate of 3.27 and Uruguay a rate of 2.94 while for Brazil the rate is 3.44, for Mexico it’s 1.59 and for the USA its 0.34.

The largest group of murdered trans and gender-diverse people, whose age is known is between 20 and 29 years of age, accounting for 44 percent of the total. “This means,” write TPP, “that more than half of all the reported victims with a known age, i.e. 56 percent were under 30 when they were murdered. “

An infographic summarising the date is available here.