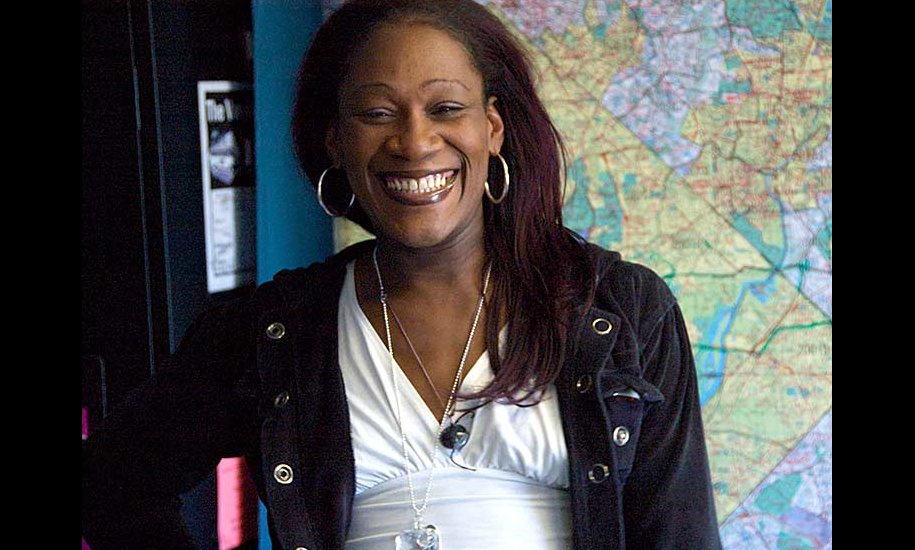 Sharmus Outlaw (Desiree Alliance) during the International AIDS Conference in 2012

Sharmus Outlaw, declared Most Amazing HIV-Positive People of 2016 by HIV Plus Magazine, died on the 8th of July from cancer. Outlaw is currently being honoured by her devoted colleagues at the Desiree Alliance Conference for the very session she planned: Trans Rights, Sex Work, HIV, Resilience and Organizing.

Outlaw was an activist for transgender and sex worker rights. Like many transgender sex workers of colour, Outlaw experienced health care discrimination. Outlaw discovered, after months of physical symptoms dismissed by health care providers, that her Medicaid application was delayed because “they were ‘confused’ over [her] gender marker.” Outlaw had been working on a report with her good friend Penelope Saunders about this issue.

Plus notes that, “Outlaw’s rapidly declining health was as much a product of our country’s systematic discrimination of trans women as it was lymphoma.”

At the time of her passing Outlaw was a national policy advocate at the Best Practices Policy Project. She was the US representative for the Programme Advisory Committee for the Red Umbrella Fund, which provides financial support to sex worker-led projects globally. Outlaw also served as a co-coordinator for the Desiree Alliance from 2011 to 2015.

In an article published in NSWP’s Research for Sex Work by Sharmus Outlaw, Jill McCraken, and Penelope Saunders, Outlaw states, “service providers we spoke to consistently affirmed the need to provide services that help transgender sex workers who experience multiple forms of oppression (including race, class, immigrant status, sexuality, and gender) build healthy lives, including housing, education, healthcare, and other resources. The best providers of these services are representatives of the trans community who have a deep understanding of sex-work related issues.” Outlaw spoke from experience.

The Red Umbrella Fund’s tribute says: “it deeply saddens all of us to have to let go Sharmus Outlaw, our 2016 Programme Advisory Committee (PAC) member, who passed away last week after so many achievements and struggles in her life.” The tribute describes Outlaw as taking up the international experience with “both hands” and a sense of “eagerness, joy and wisdom.”

In 2009 Outlaw was presented the Port in the Storm Award by the Washington Peace Centre through her work with the organisation HIPS. As Darby Hickey, one of the people who have set up a fund to cover the cost of her funeral in North Carolina says, “like so many transgender leaders, Sharmus achieved so much with no job security, almost no income and without the security of having a place to call her own, such as an apartment. Sharmus was arrested under unjust and discriminatory laws numerous times as she has been with her community in public space and as she has sought ways to live.”

Sharmus Outlaw will be featured in the September/October issue of Plus magazine.