Tanzania should decriminalise consensual adult sex work by removing or modifying article 176(a) of the Tanzania Penal Code and 181(a) of the Zanzibar Penal Code, which criminalises sex work, as well as other laws related to sex work that may infringe on human rights, including laws on “harbouring prostitutes” and “living off the earnings of prostitution,” Human Rights Watch has said in a July 18 report.

NSWP Statement in Response to the Murder of Dora

In Response to the Murder of Dora, NSWP Condemns the State Endorsed Denial of Human Rights of Sex Workers in Turkey

NSWP is saddened and angry at the news of the tragic death of Dora Özerin Turkey on the 9th of July. We send our heartfelt condolences to her family, friends and colleagues.

On Tuesday 9th July 2013, Dora, a transgender sex worker in Turkey was brutally murdered. Dora was stabbed by a person posing as a client in Kusadase, Aydin. This has left friends, activists and fellow workers saddened and angry. Dora’s death brings the number of reported murders of trans sex workers in Turkey in the last five years to 32. Levels of violence against sex workers is likely to be significantly under-reported due to the reluctance of sex workers to report violence in contexts where they are criminalised and face extreme stigma.

You can download this statement in a 3 page PDF in English below.

NSWP Statement in Response to the Murder of Jasmine

NSWP is shocked and saddened at the news of the tragic death of Petite Jasmine, a friend, colleague and superb sex work activist who was brutally murdered on 11th July.  We send our heartfelt condolences to her family, friends and colleagues.

NSWP condemns the ‘Swedish Model’ that claims to protect women involved in sex work by criminalising clients. This paternalistic approach fundamentally denies women’s agency and marks a state stamp of approval on the stigma attached to sex work, a stamp that cost Jasmine her life at the hands of her ex-partner. Jasmine was a Board member of the NSWP member group Rose Alliance and was said by colleagues to be a “fierce activist” and “a mother figure to younger sex workers who looked to her for support and guidance”. Several years ago Jasmine lost custody of her children after it was revealed to state services that she was a sex worker – a revelation that led to her being deemed as an unfit mother. Despite Jasmine’s warnings that her children’s father was abusive in the past, social services carried out an emergency evacuation procedure and removed Jasmine’s children from her home and placed them in the care of their father. Jasmine continued to fight for the right to see her children through four court cases. In each case Jasmine defended her livelihood as a sex worker against court arguments that she didn’t realise that what she was doing was a form of self-harm.

You can download this statement in a 3 page PDF below.

We, the undersigned, having noted with concern, the recent feature story by K24 TV’s Bweta La Uhalifu: Ndoa Hadaa, aired on Monday and Tuesday, July 8-9, 2013, at prime time, where they showed various sex work hotspots in Nairobi’s CBD, and having exposed the faces of some of the female sex workers and their clients, including their lodgings, wish to condemn the blatant exposure of the persons featured in this documentary by K24 and general content and messaging of the feature.

• The disregard by the journalists and producers by showing, on live television, the faces of women who sell sex thereby exposing them to risk such as beatings, rejection, shame and discrimination.

• The use of tricks by the show’s producers to blackmail and entice the sex workers into giving their personal stories and using hidden cameras, to capture faces and locations, is also suspect and in clear violation of journalism ethics and practices.

• The decision to show public exposure by some of the sex workers on live television was demeaning and dangerous to young persons who watch the show.

Human Rights Watch released a report on July 4,condemning the use of mandatory health examinations, isolation, and compulsory treatment in Greece, which has been reinstated into law on July 26, upon reappointment of Health Minister Adonis Georgiadis.

Health Regulation No. GY/39A, “Amendments that Concern the Restriction of Transmission of Infectious Diseases,” permits police to detain people without due process for the testing of HIV and other diseases of public health importance, focusing on certain priority groups, including anyone suspected of being a sex worker, intravenous drug users, undocumented migrants, and anyone living without “minimum standards” of hygiene, such as the homeless.

Since the bill was first introduced in April 2012, until April of this year when it was temporarily repealed, dozens of women suspected of being sex workers were forced to take HIV tests. When found positive, they were charged with the felony of “intentional grievous bodily harm,” or “attempted bodily harm” for having unprotected sex with customers.  The police and media published their photographs, HIV status, and personal information, and detained many of these women for months while they awaited trial. In March 2013, almost a full year after the crackdown, the last five of these women were acquitted by the courts, which found “no strong evidence” for charges of intentional harm.

Comments on the USA Trafficking In Persons Report 2013

Although migrant sex workers in Thailand are grateful for the concern showed for their well-being they would like to ask people read their report “Hit & Run” rather than the TIP report on Thailand which is again disappointing in so many ways. In brief, the TIP report is very poorly written; there is a complete lack of accountability; it is full of sweeping assumptions and generalizations; conclusions are based on guesswork rather than evidence e.g. “sex tourism may fuel human trafficking - presumably then there is an equal chance that it may not? The chronic problem they have with accurate and credible numbers persists e.g. according to the first TIP report 2001 there were 700,000 people trafficked globally but now the same report claims 27 million people are trafficked. . It is not credible academically and not accessible to migrant communities.  The report adds no new or useful information to the previous reports.

UNDP launches e-discussion on "The Global Commission on HIV and the Law: Taking the Commission's Recommendations Forward

The UN Global Commission on HIV and the Law is encouraging people to participate in a public e-discussion entitled "Taking the Commission's Recommendations Forward," from June 27th until July 25th, which is being launched by the United Nations Development Programme: here.

Below is the initial launch message. 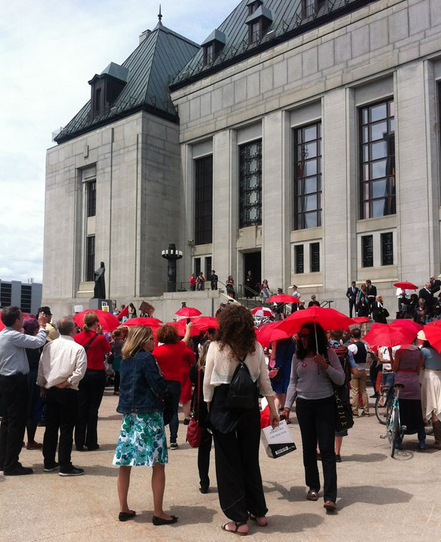 Contrary to popular misconception, sex work is legal in Canada; the act of exchanging sex for money is not a criminal offence. What is illegal are several activities fundamentally related to sex work, namely, communicating for the purposes of prostitution, (CC s. 213-1c); owning, operating, or occupying a "bawdy house" used for prostitution (CC s. 210); and procuring or living on the avails of prostitution (CC s. 212-1j). These three laws are currently being reconsidered in the Bedford v. Canada Supreme Court hearing, which took place on June 13th.