Turn Off the Blue Light protest at discrimination by Google

Author
Turn Off the Blue Light 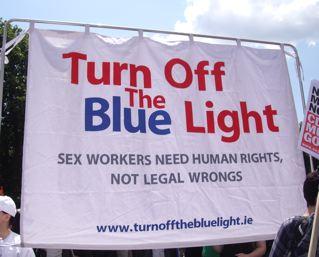 This story appeared on the Turn Off the Blue Light website on the 27 May 2011.

Unlike the main organisation in Ireland calling for further criminalisation of the sex industry, we don’t enjoy generous government funding that enables us to advertise widely, so we looked to Google AdWords as a form of advertising we could use.

Our Google AdWords advert read ‘Turn Off The Blue Light, Sex workers in Ireland need human rights, not legal wrongs’ and linked to our website, turnoffthebluelight.ie. It ran for several weeks, but was abruptly stopped by Google on May 24th.

Google emailed us stating that our advert did not comply with their terms of service and advertising policies, and as a result our account had been suspended and we were prohibited from possessing or creating any other accounts now or in the future. A link was provided to a help page explaining that the reasons for such suspensions are egregious violations. (We looked up ‘egregious’ in a dictionary, as it is not a commonly used word. It means outstandingly bad, shocking, offensive.)

We would like to make clear that TOBL is not offering or promoting any adult sexual services. Nowhere on our website do we encourage anyone to become a sex worker or avail of the services of sex workers. We do not advertise contact details for sex workers or link to any websites that do. We are a sex worker led association campaigning for the rights of sex workers. Our website contains information about us, about sex work in Ireland, our views on relevant issues and news.

We are appealing Google’s decision to not allow TOBL to advertise. Google is a company and as such it has the right to decide which adverts it will allow and which adverts it will not allow, but we believe it is wrong of Google to prevent TOBL from advertising. We note that the religious group Ruhama, the main anti-prostitution organisation in Ireland, is being allowed advertise on Google AdWords, so this is not a case where no organisation with views on sex work is being allowed advertise.

Currently in Ireland a debate is going on about bringing in new laws relating to sex work, but sadly sex workers have been excluded from this debate thus far. Whatever your views on sex work are, not allowing sex workers to speak is discrimination.

Google’s Dublin office is not just its Irish Headquarters, it’s Google’s Europe, Middle East and Africa Headquarters. Google promotes itself as a company committed to the ideals of free speech. You cannot give free speech rights to one group but not another, that’s not free speech at all.

Sex workers coming together and speaking up about sex work is not outstandingly bad, shocking and offensive. Sex workers should be included in debates about sex work, not excluded. Please help us by spreading the word about this injustice and hopefully Google will take notice and allow TOBL to use AdWords.