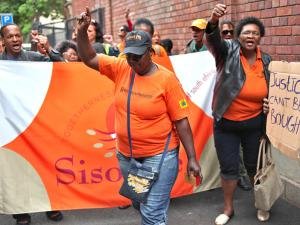 On the 5th of May, acclaimed Durban-born artist and photographer, Zwelethu Mthethwa was arrested and charged with the alleged murder of 23-year-old Nokuphila Kumalo, who is believed to have been a sex worker.

The State argues that Mthethwa "kicked and stomped her body repeatedly with a booted foot" on Ravenscraig Road in Woodstock, on April. The entire incident was caught on CCTV cameras. His case continues while he remains out on R100,000 bail.

Sisonke – the South African national movement of sex workers – has been attending the case and demonstrating outside the Cape Town Regional Court. "We want her to be remembered as a person so we can honour her life", said Duduzile Dlamini, the Sisonke Mobiliser.

The movement has also been supporting Kumalo’s mother, Eva Kumalo, in attending the trial. “I didn’t know she was a sex worker”, Kumalo told the Cape Argus, but added that she still loved her daughter and wanted to know why she was killed. On her request, Sisonke accompanied Kumalo to lay flowers at the site at which her daughter was brutally murdered.

Mthethwa’s case resumes on the 25th of November.

Mthethwa is known for his large-format colour photographs, paintings, and pastels of people in townships, informal settlements, and rural areas. He has exhibited widely in the United States, France, Germany, Italy, South Africa and Switzerland.

Sex Worker Education and Advocacy Taskforce (SWEAT) Facebook post:
"I just want to see his face, and ask him why he did this", said Eva Kumalo, mother of Nokuphila Kumalo who was beaten to death by renowned artist Zwelethu Mthethwa on 14 April, in Woodstock.