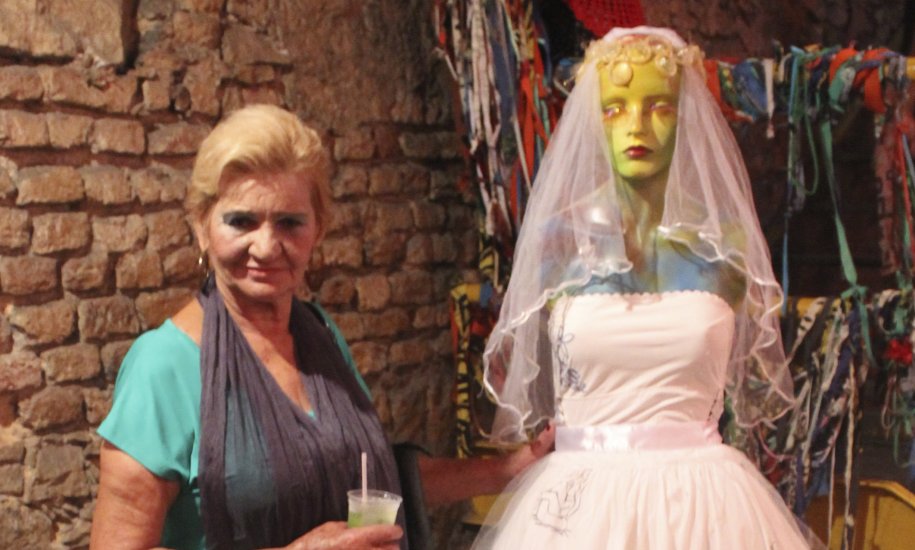 Lourdes Barreto is a sex worker leader from Brazil. In this interview, she talks about her work and activism.

The world has always been small for Lourdes
How can I talk about Lourdes Barreto without briefly mentioning how we met? The first time I saw Lourdes was at the shop stand of DASPU right before the catwalk organised in honour of Gabriela Leite, her greatest life fellow. I was organising T-shirts that would be sold during that event, and she was supposed to choose one of them for modelling. I could see how special that moment was for her, as she was choosing the colour of the Gabriela T-shirt. The DASPU catwalk in March 2014 ended with an important meeting with different sex worker activists from Brazil. In that meeting, Lourdes presented several panel discussions on the next steps of the movement of sex workers in Brazil.

I had the chance to meet Lourdes again at GEMPAC’s (Grupo de Mulheres Prostitutas do Estado do Pará) headquarter in Belém do Pará, an important city in the north region of Brazil. This article shares some discussions we had just before she left to Melbourne’s International Aids Conference, as a sex worker delegate from Brazil.

Founding a national sex workers' movement
The work of Lourdes and GEMPAC, the organisation that she founded in 1990, started in 1987. She focused the organisational work of GEMPAC mainly at the state level of Pará, Brazil’s second biggest state. Although most actions targeted Belém, the capital city of Pará, several of GEMPAC’s programmes were also addressed to sex workers and their clients in different cities, highways, and particularly in gold mining zones and remote border areas of Brazil.

At the national level they are connected to the Brazilian Network of Prostitutes (“Rede Brasileira de Prostitutas”) and internationally they are a member of NSWP. It is very important to say that Lourdes founded the national movement of sex workers from Brazil, together with Gabriela Leite in 1983. Both were fundamental in the efforts of scaling up demands of sex workers from all over the country and taking them to the highest instances of power.

They strongly influenced policy debates, particularly by underscoring ‘sex work as work’ and fighting for the recognition of sex work as labour at the Ministry of Labour. In 2002 the Ministry granted sex workers the right to have an occupation, which was a revolutionary governmental approach in spite the fact that on the ground sex workers still encounter violations and abuse, due to strong stigma that turn them into invisible citizens, not deserving rights.

They also contributed greatly to build a national HIV/AIDS programme and policy by bridging the gaps with the communities of sex workers, making sure that their voices are heard before any law or measure coming to force. Because of Lourdes and Gabriela, sex workers in Brazil had the chance to articulate their demands and be taken into consideration in policy and decision-making regarding issues that affect them.

They started this work officially in 1987, at the first meeting organised by Gabriela Leite and others, through a project of ISER (Institute of Religious Studies) at that time. In sequence, the Ministry of Health later invited them to integrate the debate at national level. Both formed the consultation group of the Ministry of Health for years, Gabriela, sadly, died in 2013. Lourdes is still active and attended the Aids Conference in Melbourne 2014.

Lourdes has paid particular attention to not focusing only on HIV/AIDS when talking about sex workers, she emphasised this in our talk. According to her, sex workers should be entitled to all rights as any other citizens, not only to the right to health. Considering that funding for sex worker organisations in Brazil is many times HIV-driven, she made it clear that all projects she worked with and for had the ultimate aim to decriminalise sex work and turn it into a profession that is recognised and respected. For her, there is no discussion about HIV in the context of sex work without considering the structural vulnerabilities of sex workers and the negative legal and policy environments they face. She also stressed the importance of tackling stigma and discrimination against sex workers.

Hence, this strong woman that is completely fearless shaped the history and work of GEMPAC. The organisation acts at the local, national and international level. Apart from being member of NSWP, GEMPAC has also engaged with several projects in Latin America and has contributed to developing relevant publications.

Today sex workers from GEMPAC advocate at the national level for the rights of sex workers, by means of a cultural event called “Puta Dei”. It started locally in Belém, yet in 2014 this event took a national proportion and reached different sex worker associations in the whole country. It celebrates the International Day of Sex Workers, 2 June, with art, shows and activism.

GEMPAC has also been very active in developing communication tools to involve new stakeholders and allies in the struggle of sex workers in the affirmation of their rights. And has established methods of denouncing violations and giving visibility to female sex workers, their demands, work and lives.

Prioritising those most in need
Lourdes explained she is involved with all sorts of organisations and institutions. Considering her long lasting activism (more than 30 years), she has met all relevant stakeholders in the field of sex work.  To name a few, different actors from the Ministry of Health and Labour of Brazil, human rights institutions, civil society, as well as politicians and relevant public figures.

She said that her work has always prioritised areas in which sex workers are most in need. In the State of Pará, a large mining (gold) state, Lourdes through the work of GEMPAC was able to reach sex workers from different towns in rural areas and sensitise both sex workers and clients about safer sex and raise awareness about rights. She was also active in guaranteeing sex workers free-of-charge access to condoms, lubricants, and ART therapy in distant and remote areas.

Another focus of her work was dealing with truck drivers. Many sex workers sell sex on the highways of Pará, reason why it is so important to raise awareness of truck drivers about the rights of sex workers, including the right to be protected from HIV infection. Sex workers from these areas benefit largely from targeted services that the Brazilian state institutions are not able to provide.

Finally, she mentioned in the interview that her work is driven by her wish of reinforcing the identity of sex workers and legalising prostitution. In Brazil, although sex work is permitted activity, still third parties and brothel owners are criminalised. That criminalisation aspect of sex work reduces sex workers’ autonomy and access to health and rights. Yet she reaffirmed that many actions in the field of health are still needed, if taking into consideration sex worker’s’ autonomy and identity. Interventions should always empower sex workers and increase their self-esteem, she said.

Being a puta
Her colleagues, other sex workers that used to work with her, firstly inspired Lourdes to create a movement of sex workers. She moved at an early age from the State of Paraíba to Pará in the 50s. She said that by then many sex workers were from Polish and French origin and that they already had the wish to organise an association of sex workers.

However, Lourdes said she only started thinking about ‘sex work as work’ when she met Gabriela in 1983. The history and the partnership of these two women are remarkable in the efforts of building of strong sex worker movement in Brazil. One inspired each other to counteract human rights violations and abuse against sex workers, and created a new way of doing activism: with art, culture and humour.

She stressed that the fight against HIV, which started in 1983, too, was the first entry to her activism, as she voiced sex workers in all relevant decisions taken by the government in relation to HIV/AIDS.

The reason behind her activism, she said, is because she cannot accept social injustice, prejudice, and because she loves being a whore (puta)! In Brazil many sex worker activists use the term whore (puta), instead of sex worker (professional do sexo). That is to emphasise their identity and because one should not be ashamed of the names society gives them. As stated by Lourdes, it is a “necessary break to the ordinary daily life”.  Lourdes also expressed her deep gratefulness for having built and run the movement of sex workers for so many years in Brazil.

For many years, a local judge refused to register GEMPAC, reason why sex workers could not associate and demand their rights. Many efforts were done to make sure that the organisation was registered and that they could make their first official reunion, and keep on working with and for sex workers.

Challenges in the future
Lourdes has no doubt that the greatest challenge faced by sex workers in the present and future is to decriminalise of sex work and fight for an identity and have it recognised by general society and sex workers themselves. She hopes for a future with empowered sex workers, who know their rights and duties, and who can work free from violence, stigma and discrimination.

A message for sex workers
‘Keep on fighting’ is her message. Unfortunately there is no other way, she said. But the key for fighting is empowering sex workers to know and demand their rights. For people outside the movement, she asked them to be ‘our allies’. She stressed the urgent need to build new and strong allies for the movement, as it cannot be reduced to sex workers only. We need to involve more politicians and academics, she said.

Strategies of activism
She ‘realises’ herself in her activism through community mobilisation. She wishes to see sex workers united, fighting for their rights, being aware that they are subjects of rights. Above all that they have a profession, an identity, and that this cannot be taken away from them.

To do all this, Lourdes believes it is only possible by engaging with the community at the grassroots level and involving them into the activities of the organisation. GEMPAC has strong history of developing community-based strategies and interventions, which utilises art and social intervention to achieve community mobilisation.

At the same time, she clarified that it is important to build strong allies at the national and international level to push governments to approve better laws in relation to sex work. Aside from that, GEMPAC is always engaged in activities that raise awareness of sex workers rights among the general population. Lourdes is convinced that just legal reform is not enough; we need to combat stigma and discrimination against sex workers. GEMPAC’s social media, Facebook page, and events are always talking this issue and seek to bridge support from general society, by changing negative attitudes towards sex workers.

Lourdes is beyond her time and lives in a world that is small in relation to her ideas and strength. She created new meanings for sex work, in Brazil, and is a fearless fighter for dignity.