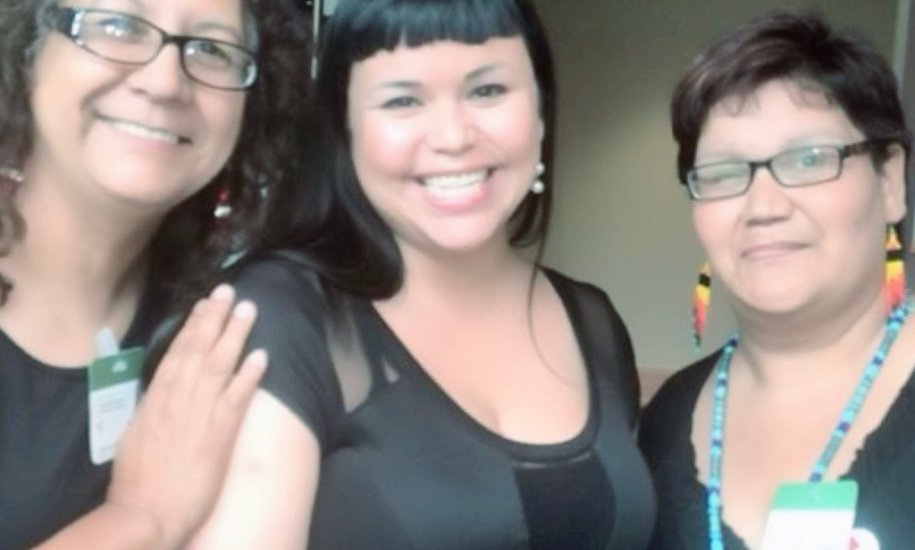 Naomi Sayers is a sex worker leader involved in Maggie's Toronto (Canada). In this interview, she talks about her life, work and activism.

Naomi Sayers and Fierce Indigenous Feminism
In 2012, while she was a university student in Canada, Naomi Sayers attended her first sex worker-only workshop, organised by NSWP member group Maggie’s Toronto. “This workshop was on fighting stigma and at the time I was in university, studying criminology (and taking a class on stigma). At this time, I was also having a lot of people with a significant amount of control over my life (doctors, counselors and the justice system), suggesting that it was because of sex work that I was having problems with my life. It created a lot of dissonance in my life because that wasn’t the reality. So after being in this space with only sex workers or people who understood issues facing sex workers, I felt that this is where I belonged, with other sex workers.”

It was an experience that lay the grounds for the beginning of her involvement in sex work activism. She has become a prominent activist in not only the area of sex worker rights, but on intersecting issues too, specifically those of Indigenous peoples. With the current issue of C-36 – the Canadian government’s proposal for new sex work legislation following last year’s Canada vs. Bedford case – and ongoing injustices around missing and murdered Indigenous women, as well as the persistence of colonial institutions and racism, Sayers is increasingly called upon for her take on the biggest social justice issues in Canada.

The Making of an Activist
Sayers says that she was inspired to become involved in activism centred around stigma and how it affects our personal and professional lives, as well as issues of criminalisation. “I was also new to this concept of decriminalisation,” she says, “and seeing other people I looked up to start talking about it more and more really opened up my eyes to how criminalisation affected me personally. I’ve been arrested for non-sex work related charges but being both an Indigenous woman and a sex worker definitely affected how the police responded and reacted to me.”

When asked who inspires her, she singles out Jessica Danforth, founder and Executive Director of the Native Youth Sexual Health Network “and all the other Indigenous activists within that network. There are many other sex work activists that inspired me,” she says, “but the list is too many to name – people at POWER, Maggies, Stella, etc…”

In terms of the mobilising support for the work that she does, Sayers’ focus lies in Canada. This work includes working with, and on various projects with, other groups. In 2013, following the Bedford decision, she founded the South Western Ontario Sex Workers (SWOSW) group in response to the lack of sex workers’ voices in that region. “I contacted several other people who are associated with other movements, like prisoners’ justice movements or Indigenous rights movements, and other sex work projects in the region, like Safe Space (London, Ontario, Canada) to help assist with this mobilizing.”

In addition to founding SWOSW, she has been involved with Maggies Toronto, the Sex Workers Action Project; Prostitutes of Ottawa-Gatineau Work, Educate and Resist (POWER) and also the Native Youth Sexual Health Network (NYSHN). SWOSW is also a member of the Canadian Alliance for Sex Work Law Reform, which formed in response to Bill C-36.

“The priority of these organisations vary.”  She says. “For example, NYSHN’s priorities are not sex work specific but they intersect with issues that sex workers may experience, and in particular, Indigenous sex workers. Indigenous people are not just criminalised in the context of sex work but that is one issue.”

“Within SWOSW, there are current and former sex workers that are involved. Right now, we are focused on Bill C-36 and ensuring that sex workers voices are heard in a myriad of ways either through media or mobilising and organising with other groups.”

Opposing Bill C-36
As would be expected of a Canada-based sex work activist group facing harmful proposed legislation that would directly impact its members, SWOSW is currently dedicated to working on opposing Bill C-36. Sayers points out that the Bedford vs. Canada case was initiated by a group of Ontario sex workers who started a Charter challenge against three main prostitution laws that were being used to target sex workers.

Sayers was invited to present at the Justice and Human Rights (JUST) Committee hearings as a witness and representative of the Canadian Alliance for Sex Work Law Reform. “While many of the abolitionists claim to be silenced in the entire process, it is quite clear that they are not being silenced.” She says. “The government has blatantly stated that they did not want to hear from sex work organisations. The government also did a public consultation in the beginning of 2014. This consultation had questions that were framed in such a way (which were critiqued by many academics) that the results would produce the answers the government wanted to see/hear. The government also had an in-person private consultation and invited religious groups, abolitionist groups and only invited a small number of representatives to represent sex workers’ voices”.

“Then for the JUST meetings, the same pattern occurred again: inviting religious groups, abolitionist groups and only inviting a small number of representatives to represent sex workers’ voices. Peter Mackay, the Justice Minister for the Conservative Government (our current government) also recently held secret, private meetings with various organisations and many of them abolitionist organisations to discuss justice issues. Bill C-36 was part of these discussions.”

“Sex work activists did their best and those who opposed the Bill also did their best to actively push against and oppose Bill C-36. We are still doing our best in keeping up with the process. But it is clear from the position of the government the direction these consultations/meetings are going that sex workers’ voices and life experiences do not matter. The government’s consultations and meetings are heavily biased towards one perspective. The government is also completely ignoring literally thousands of pages of evidence that supports the decriminalisation of sex work (note: Bedford only challenged three sections of the Criminal Code of Canada so there are still laws that police prostitution aside from these laws challenged). Some say this Bill is a win for victims. But on closer examination, this Bill will fail to protect, who are often labeled as the most marginalised and vulnerable, Indigenous women and girls who are already heavily policed in their communities. We don’t need more policing or more criminalisation to protect us.”

Although Sayers says that the biggest challenge for sex workers in Canada is resisting criminalisation, she also suggests that “we are in good position right now because there is an election in 2015. So hopefully the Conservative government will be voted out”. While she concedes that this doesn’t mean that things will suddenly improve for sex workers or Indigenous peoples, she says, it does present “an opportunity for the political agenda in Canada to change. The current Conservative government is heavy on increasing criminalisation and policing powers, as well as decreasing social supports. So hopefully there will be some change politically and socially in the future that makes it a little bit less sickening for those targeted by the police and the state, like Indigenous peoples and sex workers.”

A Message to Those In and Outside the Movement
Sayers recently attended a workshop on migrant sex work in Ottawa, Ontario, Canada, which was a part of the Peoples Social Forum. She recalls one of the presenters saying something along the lines of: “If you or your organisation are not talking about these issues, migrant rights, sex workers rights, etc..., then the space you are creating isn’t safe to have those discussions. Create those safe spaces.”

“So”, Sayers argues, “invite sex workers to the table especially sex workers who come from various backgrounds and life experiences. I say this to both sex work and non-sex work related organizations. If you are not talking about race, class, colonialism, indigenous issues, violence, or migrant rights, then the spaces you are creating are not safe to have those discussions. Start creating safe spaces to have these discussions. I also emphasise that these invitations to the table shouldn’t be an afterthought or there shouldn’t be just one person there to represent an entire group. While it is difficult to have an array of issues heard in different settings and different contexts, there should at minimum be an effort to include discussions around these issues and people who can speak to these issues at the outset of any movement, sex work or not.”

Activism: Online and In-Person
Naomi Sayers has an active Twitter account at @kwetoday and maintains a thoughtful and informative blog at kwetoday.com – “Kwe” translates into “woman” from her Indigenous language, Anishinabemowin. South West Ontario Sex Workers have their own Twitter account @SWOSexWorkers

As voice of one of the most indispensible accounts Tweeting about sex work and intersecting issues, Sayers has conflicting thoughts about social media and its reach. “Social media seems to be the best medium to reach a larger audience and an audience that wants to listen to sex workers”. She says. “Social media, however, also opens the door for more abuse to occur and attacks to take place. So I would say that this is a good method but it also has its downfalls as with any method/strategy.”

Offline, her activism takes the form of attending vigils for missing and murdered Indigenous women and girls in any community that she is in when there is one taking place:

“The issue of missing and murdered Indigenous women and girls is an important topic and many of these women and girls have participated in the sex trade. Their lives deserved to be honoured and remembered too.”

Profile by Regional Correspondent North America and the Caribbean

Region:
North America and the Caribbean