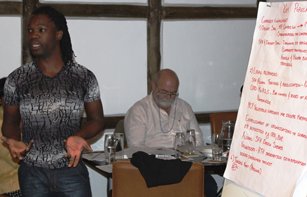 Image: Former Abel Shinana participating at a national HIV combination prevention workshop where he offered insights and recommendations on how to address the needs of key populations at higher risk. Image credit: Joint United Nations Programme on HIV and AIDS (UNAIDS)

On the 17th of May 2012, the global sex workers’ movement woke to the tragic news of the passing of the African Sex Worker Alliance (ASWA) Namibian Coordinator Abel Shinana, due to a car accident. Shinana was a vocal advocate for the rights of sex workers, people living with HIV/AIDS, and the LGBTI population.

Shinana started serving as an ASWA coordinator in 2011. Until then, the needs and rights of sex workers in Namibia had been largely ignored. However, in just over a year, Shinana began to change things around. Under his leadership sex workers in Namibia started organising themselves, and speaking out about the abuses and barriers they face in accessing HIV services.

Shinana worked closely with international organisations such as the United Nations Population Fund (UNFPA), and the Joint United Nations Programme on HIV and AIDS (UNAIDS) to help address these barriers. In a joint statement UNFPA and UNAIDS lamented Shinana’s passing as follows, “Indeed Abel was one of the new and strong voices of the human rights of sex workers in Africa, bringing the lived experiences of sex workers to the centre of policy debates.”

Just a few weeks before his passing, Shinana had taken part in a national HIV combination prevention workshop and offered valuable insights and recommendations on how to address the needs of key populations. He also co-authored the Sex work and HIV- Reality on the ground: Rapid assessments in five towns in Namibia report, and was the lead author of the related abstract that was presented at the International AIDS Conference 2012 in Washington in July.