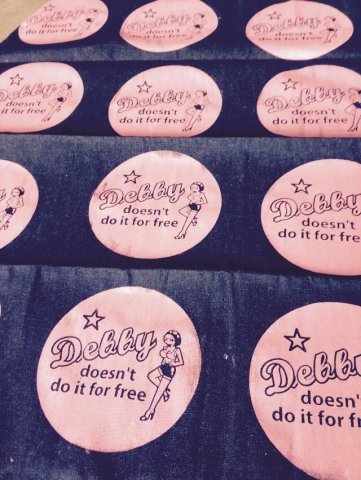 Image: Sex worker created merchandise from the Debby Doesn’t Do it for Free art collective. As a self-funded arts-based activist group, members of the network produce their own merchandise for sale at Debby shows.

In addition to a 35 hours rotational performance in the window of the gallery, which aims to highlight the gentrification of Darlinghurst and to acknowledge it as historical street-based sex working area, in addition to offering solidarity to the window-based sex workers of Amsterdam; the exhibition also included wood prints, photography, photos, multi-media and instillations from sex worker artist and activists.

The ”Debby Doesn’t Do it For Free” collective has involved over 40 sex worker participants, all of whom adopt a moniker including the word “Debby”, and has exhibited and performed advocacy works across Australia and internationally. In 2015, the collective attained a permanent rehearsal and meeting space in Sydney. As a self-funded organisation, the collective undertakes fundraising through the production and sale of merchandise.