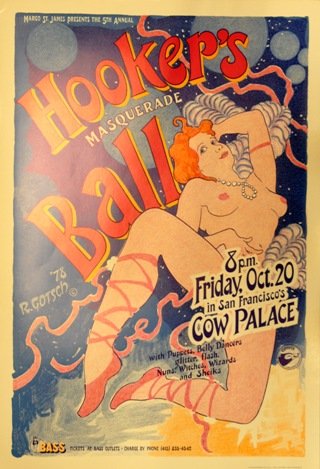 The ball, which was billed as “the social event of the year for heterosexuals, bisexuals, trisexuals, nonsexuals, homosexuals, and other minorities who feel discriminated against," was a fund raising event for Call Off Your Old Tired Ethics (COYOTE), a civil rights organisation calling for the decriminalisation of prostitution, founded by Margot St. James in 1973.  Funds raised by the Balls went towards COYOTE’s advocacy efforts, newsletter and bail fund.

The first Hookers’ Ball, writes Melinda Chateauvert in Sex Workers Unite, was “a relatively small affair, with only three hundred people in attendance”. Through the years, however, the Balls grew, filling the 12,000-capacity Cow Palace in 1978 and attracting such guests as Jane Fonda and Francis Ford Coppola.

Annie Sprinkle, who attended the first Hookers’ Ball, said in an interview with the SF Weekly: “They were a very important part of sex-positive history because whores are at the forefront of this movement…The parties were remarkable events because sex workers were coming out and making themselves public. People who supported the cause of decriminalisation were doing the same.”