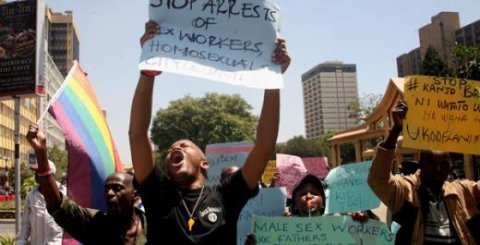 Image: Over 500 sex workers demonstrating on the streets of Thika (near Nairobi) against sex worker murders, on 8 September 2012. Image credit: Mary Wairimu

On the 8th of September 2012 over 500 members of the African Sex Worker Alliance (ASWA) and the Kenya Sex Workers Alliance (KESWA) took to the streets of Thika (outside Nairobi), demanding the same protection police officers afforded non-sex workers. The demonstration comes after the body of Catherine Njeri, a 32-year-old sex worker, was found a few days before, at a lodge. According to ASWA’s Regional Coordinator Daughtie Ogutu, Njeri was the fourth sex worker found dead in the town in less than three months.

Ogutu says several other sex workers have been killed, but the crimes go either unreported or uninvestigated because police often arrest their colleagues when they try to report. Before the Thika cases, two other female sex workers had been found dead in Changamwe (Mombasa). “Sex workers in the town even had a suspect, but they couldn’t go to the police,” Ogutu added. Police Chief Paul Leting declined to comment on Njeri’s death or respond to allegations of police negligence and abuse of sex workers.

Carrying a casket and chanting slogans such as “sex workers’ rights are human rights”, and “my body, my business”, demonstrators marched from the Thika Municipal Council hall to the District Commissioner’s office, to present their grievances, but administrative police officers denied them access [VIDEO]. They later went to the scene where Njeri’s body had been found to lay flowers and hold prayers, before boarding a fleet of buses to the village of Igikiro, to attend her funeral.