Impact of COVID-19 on Sex Workers in Latin America 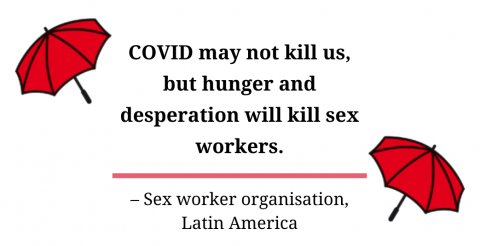 In April 2020, NSWP launched a global survey to understand the impact of COVID-19 on sex workers.

Thus far, the survey has received 156 responses from 55 different countries out of which 9 responses were from 4 countries – Brazil, Colombia, Ecuador, and El Salvador – in the Latin America region.

“It’s been two months since the pandemic hit Latin America and a lot of sex workers are now starting to work again. But the conditions that they work in are even worse than before. They are more vulnerable, and their rights are not respected. COVID may not kill us, but hunger and desperation will kill sex workers.

COVID has been really hard on us but at the same time, it's been a challenging opportunity because COVID has unified many, many organisations in the whole region. The states of Latin America need to listen to what's going on with sex workers and what they want.” – Plataforma Latinoamericana de Personas que ejercen el Trabajo Sexual (PLAPERTS), Latin American platform for sex worker-led organisations and NSWP Regional Network

“[Sex workers] have been suffering a lot of violence, not only from the police but also from the clients.”– PLAPERTS, Latin American platform for sex worker-led organisations

Like many regions around the world, countries in Latin America have introduced new measures and restrictions in an attempt to slow the spread of COVID-19. Respondents from Colombia, Ecuador, and El Salvador reported that their governments had implemented social or physical distancing measures and self-isolation for the vulnerable. Respondents from Ecuador and El Salvador reported quarantining certain areas or people.

“[They] do not allow women to use sex work but neither do they help us with food and money to cover other expenses.” – Asociacion de Mujeres Trabajadoras Sexuales LIQUIDAMBAR, El Salvador

All respondents to the survey – from Colombia, Ecuador, and El Salvador – reported the closure of brothels, bars, massage parlors, and crackdowns in areas known for street-based sex work. These measures leave sex workers with nowhere safe to work and/or no way of earning money to survive.

With the removal of their primary source of income, sex workers should expect to receive the same government support as other workers. This, however, is not the case.

“Food and vouchers have been assigned to only a minimum part of our country.” – Asociacion 22 de Junio, Ecuador

When asked why sex workers are not being included in government support schemes, respondents raised issues relating to discrimination, stigma, and a legal landscape that criminalises sex work.

“Our society is indifferent and its lack of response to our sector makes us clearly see inequities, insensitivity... SEX WORK IS NOT RECOGNISED AS WORK.” – Sex worker organisation, Ecuador

In addition to a global economic crisis, access to healthcare has also been severely affected by the ongoing pandemic. Respondents from Columbia, Ecuador, and El Salvador reported reduced access to condoms and lubricants, harm reduction services, HIV treatment, and to STI testing and treatment.

“We are invisible, we do not have access to health unless it is COVID-19 today is when they are doing more raids on us.” – Sex worker organisation, El Salvador

How is the sex worker community responding to this crisis?

“What we have a shown during this pandemic is that the sex workers are very resilient, and they have been very well coordinated with other organisations they have worked with.” – PLAPERTS, Latin American platform for sex worker-led organisations

“In our organisation what has prevailed is the self-support among us to buy food and deliver to the most vulnerable women such as the elderly, single mothers, those with greater vulnerabilities ... but many more are missing to do this.” – Sex worker organisation, Ecuador

“Food kits have been given but in small and reduced quantities that do not reach all people.” – Sex worker organisation, Ecuador

When asked what more the sex worker community needs during the COVID-19 pandemic, a sex worker organisation from El Salvador summed up the thoughts of respondents succinctly:

“We have expenses to cover, we are hungry. We need mask / gloves / alcohol gel. We want to be included.” – Sex worker organisation, El Salvador